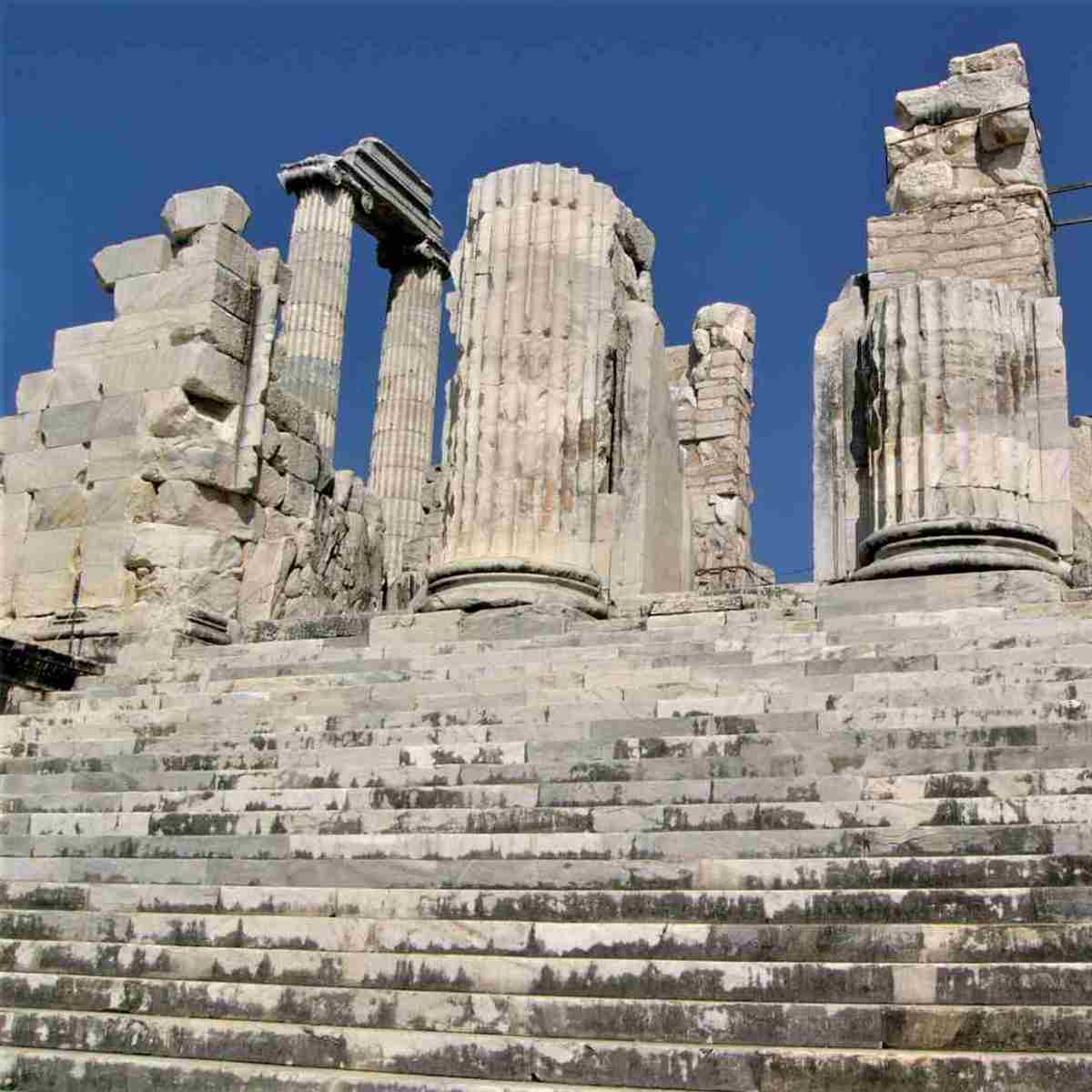 Whether you are an ancient history buff or merely want to understand Turkey’s historical diversity, a visit to Ephesus (and Didyma) is a must. Turkey’s history extends back thousands of years and the cities of Ephesus and Didyma provide a continuous archaeological journey through time. The drive from Istanbul to Ephesus is memorable.

Ephesus is an incredibly preserved ancient city in southwestern Turkey that dates back to the 10th century B.C. Didyma (100km south of Ephesus) was an ancient Greek sanctuary, home to one of the world’s greatest temples to Apollo, considered one of the best preserved temples of classical antiquity.

Marble road from Library of Celsus to the Great Theatre

The construction of the marble road connecting the Library of Celsus to the Great Theatre dates back to the 1st century A.D, and was rebuilt in the 5th century. The western side of the road is enclosed by the agora wall, and on the wall is a higher platform, some of which was finished during the reign of Nero.

Interesting to note that there are drawings on the road which are believed to be advertisements of the brothel nearby. There is a footprint showing where one should turn. It is believed that the footprint sign shows the turning point and that the woman’s head beside it symbolizes the woman waiting at the brothel.

This is said to be history’s first advertisement. The left foot meant the brothel was on the left and the dot at the top left shows the exact location. The size of the foot was large, meaning you had to have been a certain age to enter.

Driving from Istanbul to Ephesus

The drive from Istanbul (see our post on Istanbul) to Ephesus and Didyma takes you through cotton fields, sheep farms and waterfront resorts, through vineyards and apple orchards.

You also pass through the city of Izmir, founded by the Greeks, taken over by the Romans and rebuilt by Alexander the Great, it was part of the Ottoman Empire. A beautiful waterfront city, it has expansive archaeological sites including the Roman Agora of Smyrna (Izmir), now an open-air museum.

Other sites include the ancient theatre at Miletus, an ancient Greek city on the western coast of Anatolia, near the mouth of the Maeander River in ancient Caria. Its ruins are located near the modern village of Balat in Aydın Province, Turkey

The Temple of Artemis, one of the seven wonders of the ancient world was a Greek Temple dedicated to the goddess Artemis (Roman goddess Diana). The first temple was built in 800BC and destroyed by a flood in the 7thCentury BC. It was rebuilt by Croesus, king of Lydia, about 550BC and burned by a madman named Herostratus in 356BC. The Ephesians rebuilt the temple, even bigger than the original. It was estimated to be four times larger than the Parthenon. It was destroyed by the Goths in 262AD and never rebuilt. Only foundations and fragments of the last temple remain at the site, with one loan pillar (left) still standing. The temple was a place of idol worship and a focus for early Christians who wanted to covert the non-believers.

The Library of Celsus, the façade of which has been carefully reconstructed from original pieces, was originally built c. 125 AD in memory of Tiberius Julius Celsus, an Ancient Greek who served as governor of Roman Asia (105–107) in the Roman Empire.

The Fountain of Trajan was built in around 104 C.E, it is one of the finest monuments in Ephesus, and was constructed for the honor of Emperor Trajan, and the statue of Trajan stood in the central niche on the facade overlooking the pool.

Memmius Monument in Ephesus was constructed during the reign of Augustus in the 1st century A.D by Memmius, the grandson of dictator Sulla, who was a hero for the Romans, when the Ephesians revolted against Roman taxes. Under the command of Sulla, the revolting army (Mithridates of the Pontic Empire) was conquered. This monument was built to remember this conquer in 87BC.

This Temple of Hadran was dedicted to the Emperor Hadrian who died in 138AD. The Temple underwent repairs in the 4th century and has been re-erected from the surviving architectural fragments. The reliefs in the upper sections are casts, the originals now being exhibited in the Ephesus Archaeological Museum. A number of figures are depicted in the reliefs, including the emperor Theodosius I with his wife and eldest son.

Ephesus is considered an important Christian landmark, the city was home to many biblical figures including St. Paul, St. John, St. John the Baptist and the Virgin Mary.

Since the biggest ancient temple dedicated to Artemis was here in Ephesus, many idol worshipers came here, people were making idols of Artemis and selling them at the temple. Starting with the 1st century AD, notable biblical figures visited Ephesus and condemned the followers of Artemis and their practices, converting many Christians in the process. Many believe the Gospel of John was composed here.

Mary is believed to have lived out her last years here. Since the 19th century, The House of the Virgin Mary, about 7 km (4 mi) from Selcuk (1 mi northeast of Ephesus), is considered to have been the last home of Mary, mother of Jesus in the Roman Catholic teachings. This is based partly on the visions of Sister Anne Catherine Emmerich and partly from the biblical description of the crucifixion when Jesus declared John the adopted son of Mary. Many believe that when John later came to Ephesus where he worked and finally died, he brought with him his adopted mother. It is a popular place of Catholic pilgrimage which has been visited by three recent popes. The belief that it was the home of Mary has not been refuted by the Catholic Church. However, many still believe Mary lived and died in Jerusalem.

Didyma and the Temple of Apollo

The temple’s significance was its oracle (second only to Delphi), which played a huge role in the religious and political life of Miletus (one of the great Ionian cities) and the Mediterranean world as a whole. Rulers from Alexander the Great (356-323 BCE) to the Roman Emperor Dioclecian (244-313 CE) visited or sent delegations to this oracle seeking the guidance of Apollo. The oracle played a significant role in initiating the “Great Persecution” of Christians under Diocletian. The Emperor asked the Oracle what he should do with all the Christians and the reply was that they were enemies of God. The temple was later converted into a church during the 5th or 6th century AD.

Where did the priests’ vision come from?

An interesting note on the Oracle of Didyma, geologists now point out that the so called ‘visions’ experienced by the temple priests could well have had something to do with the temple’s location – it was directly upon an active spring. In fact, other geological studies at the Oracle of Delphi have confirmed that vision-inducing vapors did indeed rise from fissures beneath its Apollonian temple. No similar studies have thus far been conducted at the oracle shrine of Didyma.

It is a known fact that the original city was destroyed at least twice (by the Cimmerians in 650BC and the Goths in 263AD). However, the exact location of the city between the Bronze Age and the Roman period continues to fascinate archaeologists as there is no definitive settlement location due to the silting of the harbours and the movement of the Kayster River.

The city was under Hellenistic rule ( 197–159 BC). Later, under Roman rule (159BC to 395AD) it witnessed its time of greatness and prosperity (Emperor Augustus made Ephesus the capital of proconsular Asia in 27BC) . Ephesus remained the most important city of the Byzantine Empire in Asia after Constantinople in the 5th and 6th centuries. However, during the latter part of Byzantine rule (614AD–1090 AD) it witnessed a severe decline due to a partial destruction by an earthquake and the loss of its harbours due to silting. Ephesus was completely abandoned by the 15th century.