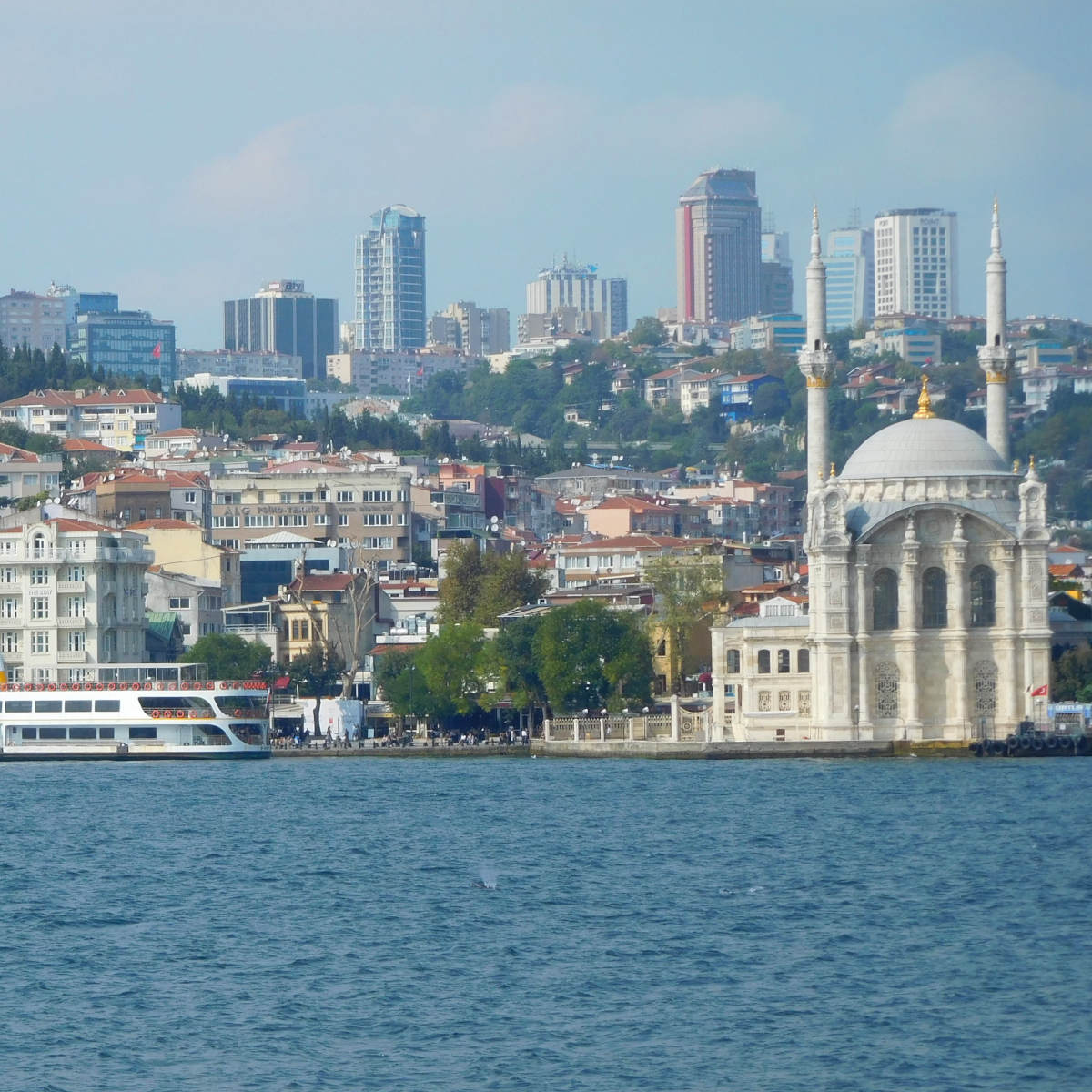 There are a handful of cities in the world that are iconic symbols of world history. Istanbul is one of them. With a total population of around fifteen million residents in its metropolitan area, Istanbul is the world’s fifteenth largest city and the largest city in Continental Europe. It is also Turkey’s commercial and historic center. It is an exciting, thriving metropolis with natural beauty and cultural diversity. In this post, we explore the neighborhoods in this city.

Turkey is a huge and diverse country with a wide and complex history and home to some of the world’s most important archaeological sites. Through different posts we will discuss three vantage points in Turkey, the city of Istanbul, the cities of Ephesus and Didyma and the area of Cappadocia (see our post on Ephesus)(see our post on Cappadocia).

Formerly known as Byzantium and then Constantinople, the city was renamed Istanbul in 1923, after the Turkish War of Independence, Ankara was chosen as the new Turkish capital, and the city’s name was changed to Istanbul.  It is a ‘transcontinental’ city in Eurasia (the largest area on Earth, comprising all of Europe and Asia). Essentially Istanbul straddles two continents (the only city in the world to do so). Its location is of great significance when trying to understand its history, the city straddles the Bosporus Strait (which separates Europe and Asia) between the Sea of Marmara and the Black Sea. It was also on the very strategic silk road. Its commercial and historical center lies on the European side and about a third of its population lives in suburbs on the Asian side of the Bosporus.

The biggest attraction is its historic center or old town, partially listed as a UNESCO World Heritage Site. However, there are other neighbourhoods that rival the Sultanahmet with culture, food and entertainment.

If it is your first time in Istanbul, you may want to stay in the Sultanahmet (old city). Besides being the place with the most famous historical monuments, it has the remnants of the historical Constantinople with Roman, Eastern Roman and Byzantine architecture. Note however, that walking around this area at night is pretty quiet, not as entertaining as walking around Taksim Square or the Ortakoy area.

The Blue Mosque above – was constructed between 1609 and 1616 during the rule of Ahmed I. It is from the Ottoman period, a functioning mosque that also attracts large numbers of tourist visitors. Its Kulliye (complex of buildings) contains Ahmed’s tomb, a madrasah and a hospice. Hand-painted blue tiles adorn the mosque’s interior walls, and at night the mosque is bathed in blue as lights frame the mosque’s five main domes, six minarets and eight secondary domes

Hagia Sophia Church,  officially the Great Mosque of Ayasofya. Built in 537 as the patriarchal cathedral of the imperial capital of Constantinople, it remained the largest church of the Eastern Roman (Byzantine) Empire until 1453, when it was converted into an Ottoman mosque.

Taksim Square in Istanbul is a busy nightlife, shopping, and dining area in the modern part of the city. You can take the local vintage trams along Istiklal Caddesi, the city’s main pedestrian boulevard to get from Taksim to various international shops, movie theaters, and cafes. The dense network of side streets is filled with bars, antique shops, and rooftop eateries with Bosphorus views.

Staying around Taksim Square in the many international and national hotels means you can walk around in the evenings and choose one of hundreds of local eateries for dinner. The food is marvelous here. This a place where locals and tourists frequent.

Golden Horn and Galata Tower in the Fatih District

The Galata Tower — called Christea Turris (the Tower of Christ in Latin) by the Genovese — is a medieval stone tower in the Galata/Karakoy quarter of Istanbul, just to the north of the Golden Horn’s junction with the Bosphorus. It is a high, cone-capped cylinder that dominates the skyline and offers a panoramic vista of Istanbul’s historic peninsula.

The Galata area of Istanbul houses many of the nightlife venues of the city, this district includes Beyoglu, Istiklal Street, and technically, Taksim Square which has its own share of sights and accommodation.

Istanbul’s Ortakoy district was once a fishing village, today is is an affluent waterfront neighbourhood with five star hotels and great restaurants. The last time we were in Istanbul, we stayed here in order to sample the local flavours. It was a treat. The Bosphorus is dotted with numerous palaces, parks and water-front mansions. For a view of the Bosphorous, The Stay Hotel is a five star selection in this area, steps from boats that take you along the river.

Because of the country’s vast differences in weather and agriculture, evolution of cuisine in Turkey was influenced by location as well as the traditions of those who settled there. The ancient Turks, for instance, were prominent consumers of horse meat and mutton. Today, lamb is the most important meat on the Turkish dinner table. Early influence from the Chinese and Persians included noodles and manti, cheese or meat-stuffed dumplings (similar to the Italian ravioli). The Persians also introduced rice, various nuts, meat and fruit stews.

During the Anatolian Seljuk period (after 1071), such ingredients as nuts, hazelnuts, locust beans, grapes (both unripe and raisins) were being widely used for various dishes. The development of thin dough, meat bread, pastries, tutmach (soup with noodles and lentils), baked head, bulgur, soup, eggplant pickles, sweet pastry, kadayif (crunchy noodle), rose jam, and tandir bread (cooked in clay oven after being brushed with egg or yogurt) are all dishes created during this period.

As the Turks moved further westward into Anatolia by 1200, they encountered chickpeas and figs, as well as Greek olive oil and an abundance of seafood.

The Ottoman Empire expanded on the already rich local traditions by bringing chefs to build on them, thereby establishing an influential Turkish cuisine. Yogurt salads, fish in olive oil, and stuffed and wrapped vegetables became Turkish staples. The empire, eventually spanning from Austria to northern Africa, used its land and water routes to import exotic ingredients from all over the world. By the end of the 1500s, the Ottoman court housed over 1,400 live-in cooks and passed laws regulating the freshness of food.

The word mezes (small appetizer plates) is found in all the cuisines of the former Ottoman Empire and comes from the Persian word meaning “taste”or “snack”. A staple of the Ottoman table, popular mezes today include:

Turkish cuisine is famous in the world for its meat dishes such as raw and doner kebab made from mutton and lamb. In Turkish cuisine, doner, fried food, roast, grilled kebabs, pot kebabs, stews, casseroles, field food, fish stews, boiled, meatballs, meaty stuffing, fruity meat dishes and a many more varieties of food are cooked.

Thrace was a group of Indo-European tribes inhabiting a large area in Central and Southeastern Europe. Starting around 1200 BC, the western coast of Anatolia was heavily settled by Aeolian and Ionian Greeks, who founded numerous important cities, such as Miletus, Ephesus (see our blog on Ephesus), Smyrna and Byzantium.

The history of Anatolia (Asia Minor) goes back to the bronze age, fast forward to early civilizations, we have Anatolia under Persian rule (550BC – 333BC), Anatolia under Greek rule (by 333BC Alexander the Great had effectively vanquished the Persians, thereby fulfilling his father’s wish of liberating the Greeks of Anatolia). Next came Byzantine Anatolia and the Roman Empire (324BC to 1453AD) and finally we come to the Ottoman Anatolia (1450s to 1900s) and modern day Turkey.

The history of the Ottoman Empire (14th to 20th centuries) consists of the history of the Turkic peoples and related groups who migrated west from Turkestan and what is now Mongolia towards Eastern Europe, Iran, and Anatolia. They came in waves after the fall of the Roman Empire. After many battles, they established their own state and later created the Ottoman Empire. The main migration occurred in medieval times, when they spread across most of Asia and into Europe and the Middle East. The Ottomans ended the Byzantine Empire with the 1453 conquest of Constantinople by Mehmed the Conqueror. With Constantinople (modern day Istanbul) as its capital and control of lands around the Mediterranean Basin, the Ottoman Empire was at the centre of interactions between the East and West worlds for six centuries.

Its defeat and the occupation of part of its territory by the Allied Powers in the WWI resulted in its being partitioned and the loss of its Middle Eastern territories. The Turkish War of Independence led to the emergence of the modern day Republic of Turkey.

The Silk Road was a network of trade routes between China and West with Turkey in a strategic mid-point position.- see out post on the Silk Road