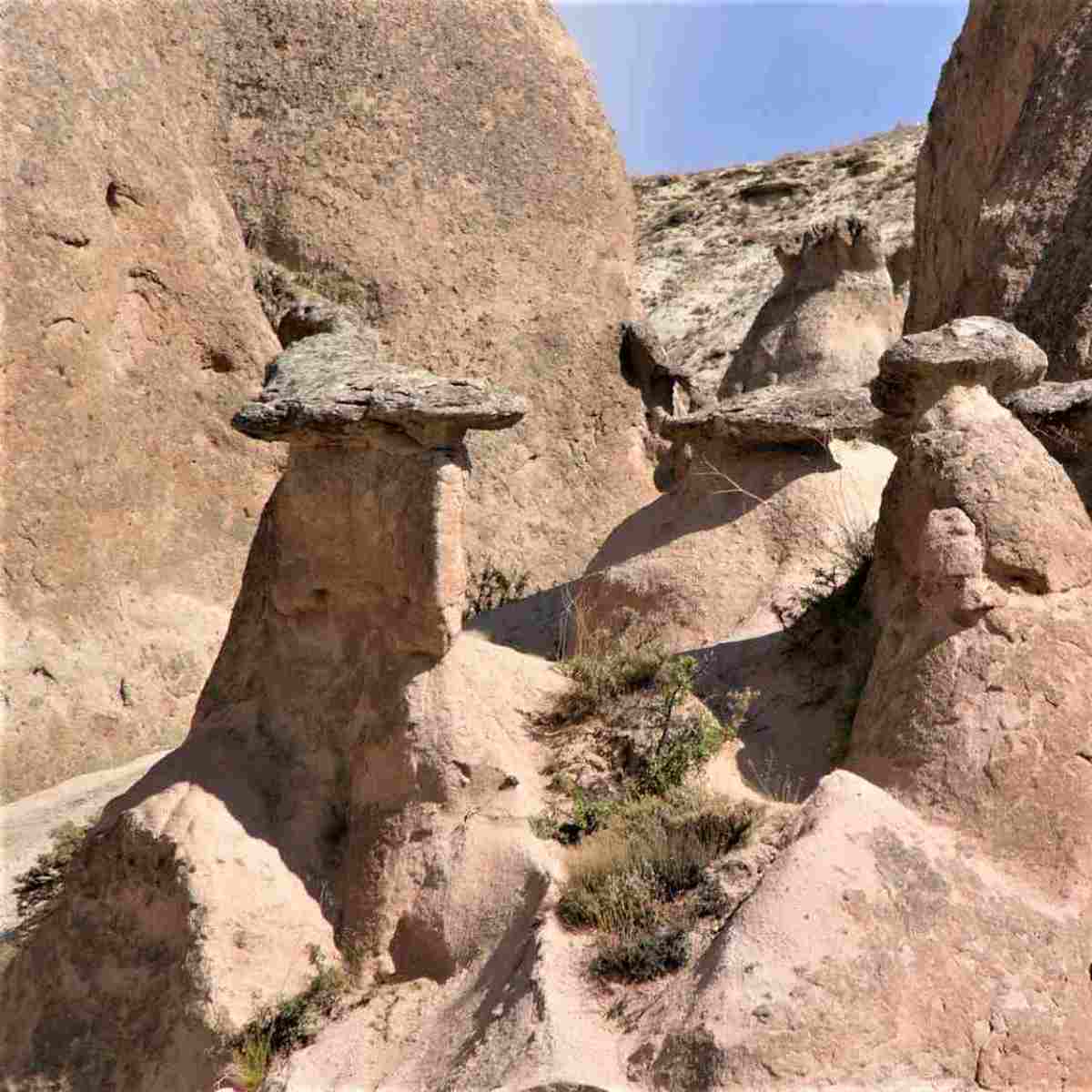 Cappadocia in central Turkey is one of the world’s most unique travel destinations. To visit Turkey and not visit Cappadocia means missing out on a huge part of the country’s history. Granted, it is far from Istanbul and the coast, but it so pivotal to understanding the country that it is worth the effort of getting there.

Meaning the ‘land of beautiful horses’ in Persian, it was once the center of the Hittite Empire (1700BC-1200BC) and the largest province of the Roman Empire (314AD). The area was integral to much of early Christian philosophy (4thCentury) and a haven for Christian worshippers. It was later a frontier zone against Muslim Conquests (7th-10th Centuries). Cappadocia was also one of the most important junctions on the Silk Road (130AD to 1453AD).

A fool dreams of wealth, a wise man of happiness – Turkish proverb

Goreme is located among the fairy chimney rock formations in Cappadocia with a population of around 2,000 people. It became a UNESCO World Heritage Site in 1985 under the name Goreme National Park and the Rock Sites of Cappadocia.

The chimneys are a result of a geologic process that began millions of years ago, when volcanic eruptions rained ash across what would eventually become Turkey. That ash hardened into tuff, a porous rock, which was covered by a layer of basalt. Finally, the long work of erosion began. As millennia passed, the softer tuff wore down, giving way to pillars that stand as tall as 130 feet. The harder basalt erodes more slowly, forming a protective, mushroom-shaped cap over each one.

The cave hotels in Cappadocia are world renowned for their uniqueness. Most of the luxury hotels have two types of rooms, the actual cave rooms without windows and totally entombed, and the rooms above ground that have been remodeled with windows. The experience of a totally entombed room may or may not be what you want. At a luxury hotel, these rooms are luxurious with huge bathrooms and writing area. They are not small, only dark and no windows. We initially booked one of these but the claustrophobic feeling was not something we could overcome and asked to be moved to a room with terrace and window.

The balloon rides are everywhere and if you have never been on a hot air balloon, this would be the place to try it. It is very touristy and not our thing but we have heard that most people enjoy it greatly. There are various budget categories for the rides, depending on what is included and how long you are in the air.

Cappadocia and the defacing of Byzantine art

During the Iconoclastic period in Christian history (7th and 8th centuries), many of the frescoes and paintings were damaged, while the eyes of the images were scratched out by the local population superstitious of the “evil eye.”

Some believe that the people were worried about how the beautiful, powerful, watchful eyes might convert them.  Much of what you see there will have the eyes defaced.

The frescoes from the iconoclastic period were mainly paintings in red tempera depicting a simple crucifix.

The carvings below were made during the iconoclastic period (725-842), as illustrated by the decoration, a strict minimum of sculpted symbols and the minimalist crosses.

There had been a continuous Greek presence in Cappadocia since antiquity and the indigenous populations of Cappadocia, some of whose Indo-European languages may have been closely related to Greek, became entirely Greek-speaking by at least the 5th century. In the 11th century Seljuk Turks arriving from Central Asia conquered the region, beginning its gradual shift in language and religion. In 1923 following the genocide of the minorities of Turkey the surviving Cappadocian Greek native communities were forced to leave their homeland and resettle in modern Greece by the terms of the Greek-Turkish population exchange.

Turkey in general and Cappadocia specifically, have a long history of carpet making.

The process starts by shearing the sheep and extracting the natural wool. It is then cleaned and dried. The spinning process transforms the wool by twisting the fibres together to form yarn. The spinning process is traditionally done by hand. Next, the wool is dyed in various colours needed for the carpet. Either natural plants including roots and insects are used, or chemical dyes.

Cappadocia and the Silk Road

The Silk Road was a network of trade routes between China and West with Turkey in a strategic mid-point position. It officially opened in 130 B.C. and remained in use until 1453 A.D. An integral part of the Silk Road was from Istanbul to Ankara, along Turkey’s Great Salt Lake to Cappadocia and onwards.

The Byzantines loved the treasures from the east and were prominent players in the silk road trade. The most important part was that which ran between Konya and Cappadocia. The Selijuk Turks (ruling military family of the Turkic tribes) further improved the roads and built hundreds of beautiful caravansarai to encourage trade with the east. The Mongols unified the lands of the Silk Road and made movement easier. The government also developed a sophisticated “pony express” (ulak) system which allowed important messages and persons to travel between Europe and China quickly and safely.

The importance of the caravanserais (large stone buildings such as the one below) cannot be overstated. The caravans were received into the caravansarai each evening, and were welcome to stay free for three days. Food, fodder and lodging were provided free of charge, courtesy of the building’s founder.

A historical note: A brief history of the Cappadocia region

In the 3rd century, Christians came to Cappadocia to escape Roman persecution and it became a centre for Christian education. The 4th century is the period known as “Fathers of Cappadocia” (early Christian philosophy). The importance of the region reached its climax when Leon III, Emperor of Rome banned icons. Many people who were pro-icon started to take shelter in the region. The “Iconoclasm” movement lasted more than a hundred years (726-843). Although some Cappadocian churches were under the influence of Iconoclasm in this period, pro-icon people easily continued worshipping here. The monasteries of Cappadocia developed considerably during this period.

From the 7th to 10th centuries, Arab raids started to affect the Christian regions in Anatolia, from Armenia to Cappadocia. People escaping the invasion and coming to the region changed the styles of churches in the area. In 11th and 12th centuries Cappadocia passed into the hands of the Seljuk Turks (Sunni Muslims). The region spent a period without trouble under the Ottoman Empire. The last Christians in the region migrated from Cappadocia due to the exchange of Treaty of Lausanne in 1924-26. The region is full of beautiful architectural icons.

Iconoclasm is the deliberate destruction within a culture of the culture’s own religious icons and other symbols or monuments. It is common belief that the iconoclastic period in Christian history was generally motivated by two factors. The first is an interpretation of the Ten Commandments that declares the making and worshipping of images, or icons, of holy figures to be blasphemy.

The second was the importance of Islamic prohibitions against images influencing Byzantine thought. According to Arnold J. Toynbee, for example, it was the prestige of Islamic military successes in the 7th and 8th centuries that motivated Byzantine Christians to adopt the Islamic position of rejecting and destroying idolatrous images.