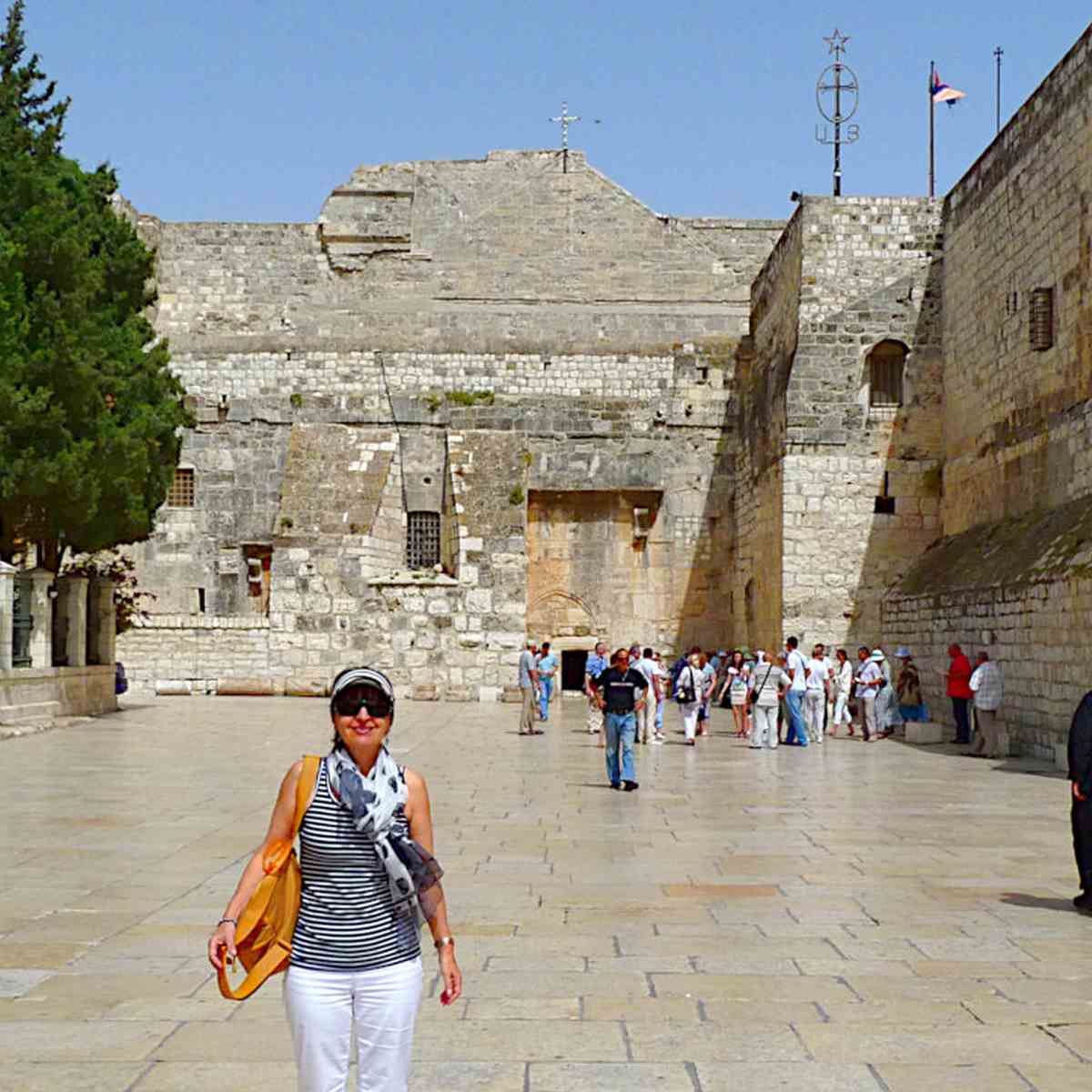 From the birthplace of Jesus to unbelievable local flavors, ancient cities and epic sites, the Palestinian Territories are captivating to visit.

Whether you are fascinated by ancient biblical history or just curious about the political situation, the Palestinian Territories are not to be missed. Granted, tourism is not exactly the area’s focus and travel to the Territories is complex.

Bethlehem – Church of the Nativity

Traveling around the Palestinian Territories

As discussed in our Israel post (see post on Israel), traveling around Israel and the Palestinian Territories (West Bank and Gaza) can be a challenge, especially if you are trying to maximize your time.

The Palestinian areas under the Palestinian Authority are not contiguous, and depending on your itinerary you may have to cross Israeli checkpoints a number of times in the day. The West Bank has been under Israeli occupation since 1967. The area is split into 167 Palestinian “islands” under partial Palestinian National Authority civil rule, and 230 Israeli settlements into which Israeli law is “pipelined”.

Israel enforces restrictions on the freedom of movement of Palestinians in the West Bank by employing a system of manned checkpoints and watch towers. Some checkpoints are permanent while others are temporary. Depending on time of day, cars with Palestinian license plates may be forbidden the usage of main roads. There is also the great West Bank Barrier, a wall that was built to contain the Palestinian areas which includes the town of Bethlehem. When we were there, cars with Palestinian license plates were being directed off the main road at rush hour, thereby adding hours to travel time. The restrictions may ease at times, depending on the political climate. We avoided this restriction by hiring a guide with UN license plates. He was able to go in and out of both Israel and the Palestinian territories.

A trip to Bethlehem inevitably means navigating the Barrier Wall. Built in 2003 to great objections from the outside world, the wall is mostly entirely in the West Bank (90%) and separates tiny Palestinian villages from one another. Inside the wall area is known as “Area A” and is under the control of the Palestinian Authority. To most Israelis, the wall is considered a security measure protecting Israel from attacks by the Palestinian community.

When going to Bethlehem, if your driver is Israeli, he will have to drop you off at an check post. Once you pass the check post, you will have to transfer to a Palestinian taxi. Israeli Jews cannot enter Bethlehem which comes under Area A.  On your way back, you will have to do the opposite. As noted above, we avoided the transfer issue by hiring a driver who had UN license plates.

The irony of Bethlehem is lost on no-one. Those who travel to the Church of the Nativity and come back touched by the sanctity of the place, cannot help but find the images of the barrier incongruous with what they have just experienced. For those who are engaged in the politics of the region, the pilgrims are a touristy afterthought. Bethlehem can be a disturbing experience, albeit one you will not want to miss.

The Hebron Protocol of 1997 divided the city into two sectors, one controlled by the Palestinian Authority, and the other, roughly 20% of the city, including 35,000 Palestinians, under Israeli military administration. All security arrangements and travel permits for local residents are coordinated between the Palestinian Authority and Israel via the military administration of the West Bank. The Jewish settlers have their own governing municipal body.

Hebron is said to be a microcosm of the entire area. Hebron is only 28 KM from Jerusalem and an easy day trip for us as we did not have to switch cars.

The focal point of our visit to Hebron was touring the streets and visiting the Tomb of the Patriarchs, known to the Jews as the Cave of Machpelah, and to Muslims as the Al-Ibrahimi Mosque.

The structure is made up of a series of caves that, according to the Muslim religion, together with the adjoining field, were purchased by Abraham as a burial plot. Mohammed is said to be the direct descendant of Abraham. During Byzantine rule of the region, a basilica was built on the site and was converted into the Al-Ibrahimi Mosque following the Muslim conquest of the area.

During the Six-Day War of 1967, the entire Jordanian-occupied West Bank was seized and occupied by the State of Israel, after which the structure was divided into a synagogue and a mosque.

As the site is sacred to both Muslims and Jews – there are strict areas for praying allocated to each.

In 1994, the Cave of the Patriarchs massacre occurred at the Ibrahimi Mosque, in which an armed Israeli settler entered the complex on the Jewish holiday of Purim—which had occurred during the Islamic holy month of Ramadan—and opened fire on Palestinian Muslims who had gathered to pray at the site, killing 29 people, including children, and wounding over 125.

A city deeply entrenched in the Arab-Israeli conflict, Nablus’ jurisdiction was handed over to the Palestinian National Authority on December 12, 1995, as a result of the Oslo Accords Interim Agreement on the West Bank. Nablus is surrounded by Israeli settlements and has been the site of regular clashes with the Israel Defense Forces.

In the 1990s, Nablus was a hub of Palestinian nationalist activity in the West Bank and when the Second Intifada began, arsonists burned down Jewish shrines. In 2006, militias kidnapped two foreigners and threatened to kidnap more as a protest of the Muhammad cartoons published in Denmark.

Nablus has been called the “capital of terror” of the West Bank. Nothing about the city would alert you of its violent history, until you venture into the smaller alleyways where you find walls full of pictures of young men who have died here.

Tell Balata is an archaeological park, identified as the site of the first settlement in the area, the ancient town of Shechem, dating back to the 2nd and 1st millennia BC. The site is located in the main hill-country of Palestine, near Nablus.

The most impressive find is the fortress temple that archaeologists believe was used as a public place of worship. A path around the edge of the site also allows visitors to trace the old city walls.

The location has many water sources in addition to good winter rainfall and fertile land, thus providing good means of subsistence, a reason for its longevity. Ancient Egyptian and other texts mention the town as well as its king during the 14 th century BC, when the town was the capital of a large city-state. The town was destroyed by the Assyrians in 732 BC.

If you are doing a day trip to Ramallah and Nablus from Jerusalem, a stop at the Tell Balata Park is convenient and offers a panoramic view of the surrounding countryside.

Ever since Yasser Arafat established his West Bank headquarters in Ramallah, the city has become the de facto capital of the Palestinian Authority, now officially known as the State of Palestine (by the United Nations). It hosts almost all governmental headquarters. Many foreign nations have their embassy in Ramallah.

While historically an Arab Christian town, Muslims constitute a majority of Ramallah’s residents with Christians making up a significant minority.

After Israel captured Ramallah from Jordan (6 day war), it imposed military closure and conducted a census whereby every person registered in the census was given an Israeli identity card which allowed the bearer to continue to reside there. Anybody not on the census lost any claim to residency rights.

Israel did not offer citizenship to the residents but they were issued work permits to work in Israel. The city remained under Israeli military rule for more than four decades.

Ramallah and surrounding area was classified as Area A in the Oslo Accords and are under full civil and security control of the Palestinian Authority administration.