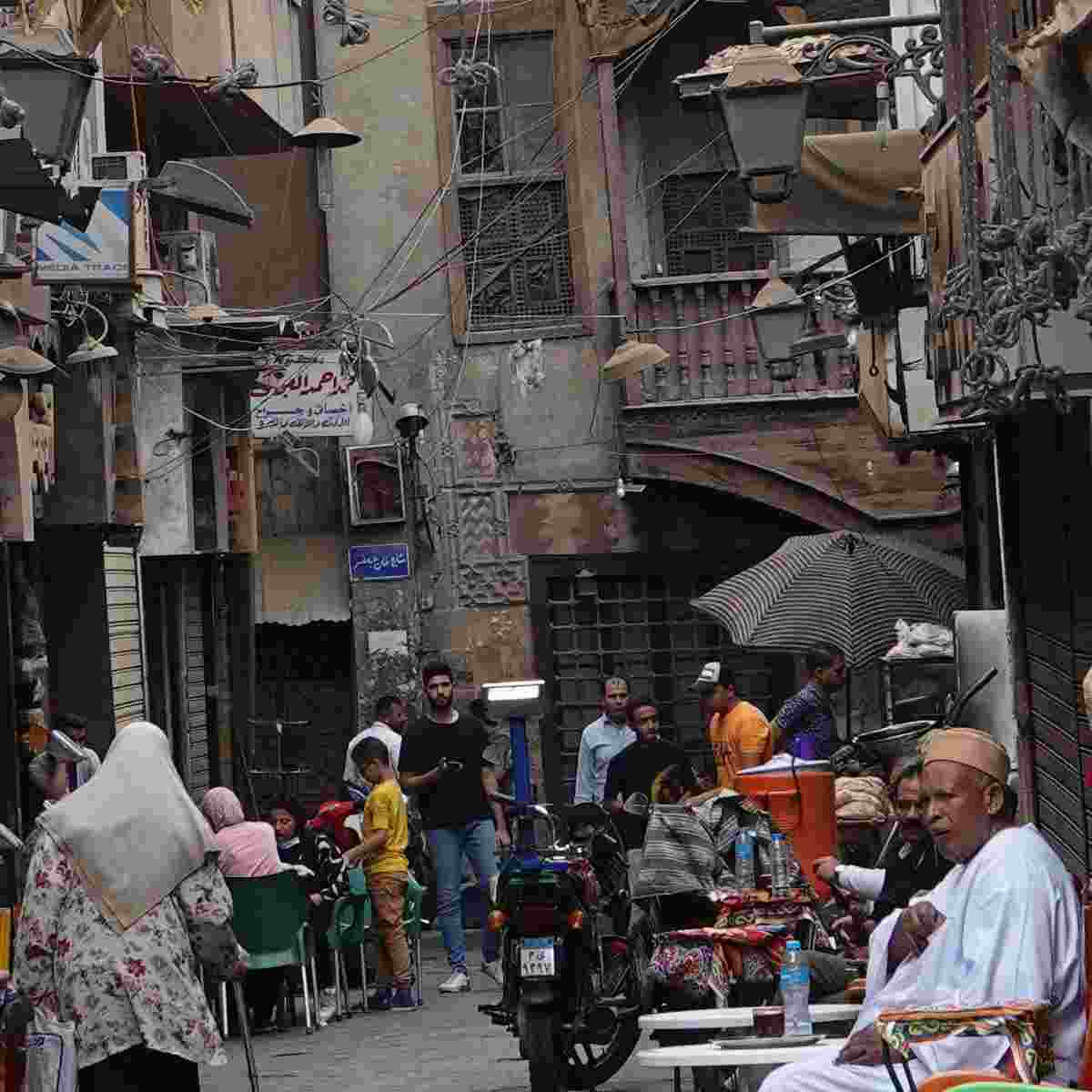 There is more to Cairo than the pyramids and sphinx. There are incomparable museums and sprawling neighborhoods with a fascinating history. We visited the individual neighborhoods that make up Africa and the Middle East’s largest city. As it has stood on the banks of the Nile for 1000 years, Cairo’s neighborhoods are full of historical and cultural richness unparalleled in the modern world.

The city’s ancient past, its medieval bazaars and souks stand side by side with its contemporary art and music scene, while the roads are treacherous, gas prices are subsidized, and therefore everyone drives everywhere.

At the center of the city is the Tahrir Square, and the last uprising left with bullet holes easily visible in buildings surrounding the square. The holes are from the Egyptian revolution of 2011 when Hosni Mubarak was forced to step down after 18 days of demonstrations.

Notably, to the south of Tahrir is the well-planned, green district of Garden City, an affluent area of the city and ironically, the Vatican of Rome owns the biggest portion of land there where the Dieu School for Girls is housed. On the southwestern corner of Tahrir Square is the Omar Makram Mosque.

Cairo’s architectural monuments date back to Roman, Arab and Turkish times. The Egyptian Antiquities Museum (now closed but will reopen in 2022-2023 in a different location, near Giza), is a must visit. It houses the world’s largest collection of ancient Egyptian artifacts. There were two main floors to the original museum, the ground floor with an extensive collection of papyrus and coins used in the ancient world and the first floor where you will find artifacts from the final two dynasties of Egypt, including items from the tombs of the Pharaohs.  The museum will be moving its entire collection to the highly anticipated new Egyptian Museum near Giza.

Other museums to visit include the National Museum of Egyptian Civilization, newly opened and temporarily showcasing a few of the treasures from the old Antiquities museum until it reopens in 2022-2023, including the mummy of Ramses II.

Although Giza houses some of the most visited sites in Egypt, it does not have the infrastructure to accommodate the crowds (at least before the pandemic) that descend upon it daily. Most of the five and four star hotels are in Cairo proper and due to the traffic, it can take up to two hours’ drive to Giza. There is one four star hotel (the Mena House Marriott) in Giza, a beautiful, sprawling place (some rooms have a direct pyramid view), but almost nothing else except rooming houses.

Some of the rooming houses have rooftops with the best view of the Sphinx and Pyramids, you would not want to stay here but you can go to have a beverage and a view. Unfortunately, going to a rooming house rooftop and taking pictures of the sunset coming down over the pyramids while sipping on a beer or glass on wine will not be possible as these rooming houses are not legal and they cannot serve alcohol.

While the Giza Pyramids are the largest and most known, there are many pyramids in Egypt (over 100) and the evolution of pyramid construction is a fascinating chapter in Egyptian history.

The Great Pyramid of Khufu is the largest of the three and Egyptologists believe the pyramid was built as a tomb over a 10 to 20 year period.  It was the tallest man made structure in the world for more than 3,800 years until 1300. There are three chambers in the pyramid. The King’s Chamber, the Queen’s Chamber and the lowest chamber which is said to be unfinished. The Great Pyramid’s core is made of yellowish limestone blocks, the outer casing (now almost completely gone) and the inner passages are of finer light-coloured limestone, and the interior burial chamber is built of huge blocks of granite.

The area around the pyramids is very spotty. There are many questionable characters offering tourists camel rides, horse drawn buggy rides and horseback rides into the desert, and if you pay enough you can end up in a good spot far enough from the pyramids to be able to take some great photographs.

The best spot for photography is a hilltop in the desert high above the pyramids, reachable by going through a small, extremely filthy village, we went on horse (Maradona) and buggy. Our guide paid someone to let us through a narrow alleyway on our way up there, not sure what the payment was a bribe, we didn’t ask.

A historic area in Cairo and the oldest part of the city, Old Cairo with its captivating alleyways is a treat for an afternoon. It is a relatively small, charming and chaotic area, guides are not required but walking tours are available. We have never found safety to be an issue here, everyone is always friendly and welcoming.

Also known as Islamic Cairo, there are several mosques here, while vendors have been selling copper, gold and spices here since the 14th century. A walk along Muizz Street, one of the oldest streets in Cairo, is a captivating venture with its Islamic architectural treasures; mosques, madrassas, mansions and palaces.

City of the Dead

Cairo’s City of the Dead is a series of Islamic necropolises and cemeteries that extend for approximately 4 miles long, containing the remains of rulers and elites. Throughout their history, they were home to various types of living inhabitants such as the workers whose professions were tied to the cemeteries, religious scholars and others. During the 19th century, as the population of Cairo increased, the housing shortage got worse and squatters turned this area into impoverished housing.

Garbage City and the Zabbaleen

MANSHIYAT NASSER, or commonly known as Garbage City, is a slum settlement with a population of around 60,000 on the outskirts of the Moqattam Hills, within Cairo’s metropolitan area.

The village is known for having nearly every space of it covered in garbage, including the streets and rooftops. It began during the tough farming years in the 1940s when farmers in Upper Egypt started migrating to Cairo, looking for relief from famine and poverty and began raising animals. They also took up collecting garbage from the residents, sorting it, recycling it and salvaging anything still of value. Soon, they found that garbage collecting was more profitable that raising animals.

In the 1970s, these garbage collectors who were scattered throughout Cairo, started getting evicted so they decided to move together as a large community. Garbage City was born, albeit under very poor conditions, lack of water, electricity and sewers.

The area today is around 6 square kilometers and it is its own economy, which continues to thrive as a result of the fact the Cairo Metropolitan Area of nearly 20 million people has never established its own viable garbage collection and recycling system.

The “Zabbaleen” derived from the word for “garbage” are the people who deal with the garbage collection business. They provide an informal service of picking up garbage from Cairo clients, recycling it (up to 80% according to one study) and disposing of the rest, for a fee. It is an inherited profession, passed on through the generations. The vast majority of the Zabbaleen are Christian Coptic.

In Garbage City is St. Simon Monastery, also known as The Cave Church, the largest church in Egypt and the Middle East

As discussed above, the majority of the residents of the Garbage City community are Coptic and once they moved here and felt more secure in their new location, they began establishing their church in 1975 by using a pre-existing cave and the slope that let into it. Other nearby caves have also been built into separate church spaces and all of them have been linked to create a massive Christian complex in the heart of garbage city.

The Polish sculptor Marius Dybich (Mario) was in Egypt on an education mission in the 1990s when the Parish priest approached him about the church complex. Mario spent two decades carving the insides of the seven cave churches and chapels of the St. Simon Monastery and church complex , with designs inspired by biblical stories. He created a masterpiece with impressive paintings and stories carved on the wall and into the mountain rocks, in addition to sculptured statues of Virgin Mary, and Mary Magdalene. The current monastery seats 2,000 people.

The Cave Church was dedicated to St. Simon who worked in tanning (The Tanner) and lived in the 10th century during the rule of Fatimid Caliph Al-Mui’zz.