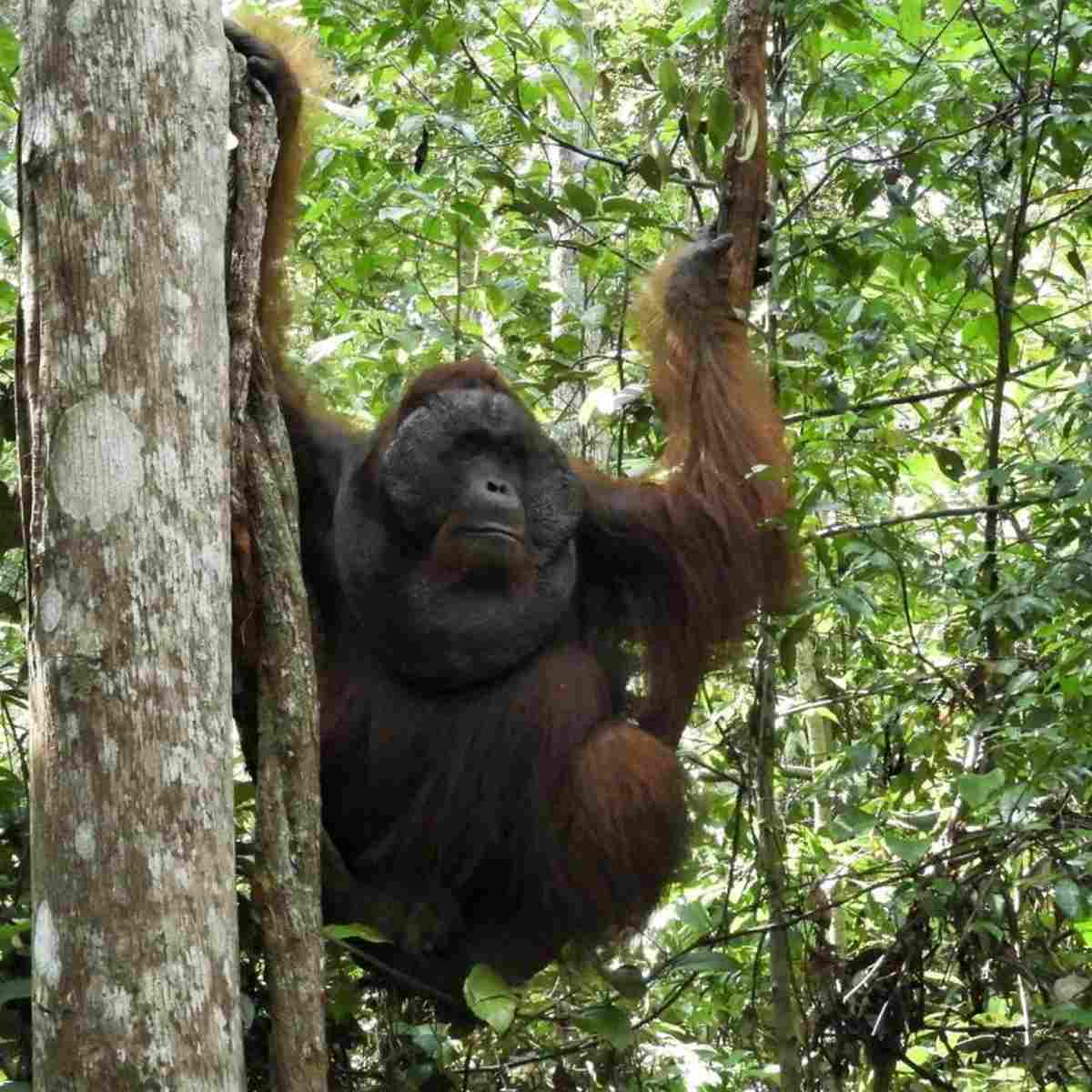 The best way to see Borneo is on the water. We debated a water only tour or a combination of hotel and houseboat. In the end, we opted for the water only option as the available hotel accommodation was not that enticing. It is a bit surprising that better accommodation does not exist in close vicinity to the Orangutans. The locals tell the story of Barak Obama and Bill Clinton, who both visited the area (at different times) and both flew out the same day.

Borneo is a huge island (3rd largest in the world), and is home to the world’s oldest rain forest, at least until it was depleted by the palm oil industry, illegal logging and gold mining. Borneo consists of 3 countries: Brunei, Malaysia and Indonesia. It is impossible to experience everything Borneo has to offer without a month-long itinerary, but Borneo is one of only 2 places to see Orangutans in the wild (the other place is Sumatra) and that was our focus.

After lots of research, we chose the Indonesian part because we wanted a river cruise where we could eat and sleep on the boat. This was not an option on the Malaysian side (as of 2019). We decided to charter a houseboat (klotok) and to spend 4 days on the Sekonyer River.

To get to the Sekonyer river we flew to Pangkalan Bun Airport (PKN), which is close to the small port city of Kumai, on the busy Kumai River, which is where we chartered the houseboat.

TIP: You may want to pick up some supplies in Kumai before boarding, like your preferred tea, or biscuits or juice. The food on the boat is fine but the choice is limited and the coffee is terrible. Also beer has to be pre-ordered, and one of the crew will have to purchase it.

About 20 minutes upriver from Kumai we turned up into the quiet Sekonyer River which borders the Tanjung Puting National Park, staying in the national park for the next 4 days.

Tanjung Puting National Park is a huge area with peat swamp forests and tropical rainforests. It was established over the years (1935-1986) as a conservation area and is famous for orangutans and proboscis monkeys.

Orangutans are critically endangered due to deforestation, palm oil plantations and hunting. They can be seen sometimes in trees along the bank of the river, but it is much more common to see the Proboscis monkeys there. There are a few stations and Orangutan rehabilitation centres in the National Park that are worth visiting: Pasalat Camp (reforestation), Tanjung Harapan Camp, Pondok Tabggui and the world famous Camp Leakey.

Camp Leakey is named after Dr. Louis Leakey, a paleo-anthropologist who mentored Jane Goodall (chimpanzees) and Diane Fossey (gorillas). Prof Leakey and Canadian Dr. Birute Galdikas, along with the help of and the National Geographic Society, and photographer Rod Brindamour, set up Camp Leakey as a research facility.

In 2000, a mob of hundreds of armed illegal loggers threatened to burn down Camp Leakey, but a handful of local police diffused the situation.  Today Camp Leakey is a conservation area focusing on the rehabilitation of orphaned orangutans, many of which were once illegal pets.

Even though the feeding stations attract Orangutans, sightings are not guaranteed. Orangutans sometimes stay away if they find easier food elsewhere. One of our first visits to the feeding station at Tanjung Harapan, no Orangutans showed. Luckily we managed to spot an elusive white-bearded gibbon, which is endemic to Borneo and extremely hard to photograph because of their speed when swinging through the trees. This one kindly paused for a moment to check us out.

TIP: Mosquitoes are abundant, and Borneo is a malaria zone. Plus it is always hot and humid which makes it tempting to wear shorts and sleeveless tops while hiking in the forest. An effective protection is the combination of insect repellent and wearing light clothing treated with Permethrin.

The Proboscis monkeys, unlike Orangutans, live in groups, with one male (seen sleeping above) and several females and infants. The monkeys below were resting along the river bank in late afternoon, and our naturalist made some loud noises to rouse them. They responded with angry honks and hollers of their own. Their large nose is used when they honk – as seen by the mother with her flared nostrils.

We enjoyed our houseboat charter; there was just the two of us plus 4 crew: a naturalist/guide, a skipper, a cook, and a deckhand. Each night the skipper would anchor at a secluded spot that would either favor a sunset or the sunrise, and candlelight dining in this setting was memorable.

As an alternative to staying aboard a houseboat, many visitors make day trips to see Orangutans; they will board a klotok or speedboat in Kumai or from a cruise ship at anchor in the Kumai river. So the Sekonyer river can have many boats during the day, but it gets very quiet by mid-afternoon.

Another alternative to sleeping on a houseboat is to stay at a lodge on the Sekonyer River, like actor Julia Roberts did. We visited the lodge and saw some of the rooms (35 rooms total), but it’s not the experience we were looking for. Some guests who stayed there even said they wished they could have spent at least one night aboard a boat. Above is the one of this lodge’s boats (a typical wooden klotok), taking a group of photographers (led by Daniel Cox), to and from the feeding stations. It doesn’t look too crowded.

Along the Sekonyer River are a few fishing hamlets, as well as the Tanjung Harapan Village, which was re-located from inside the park across the river.