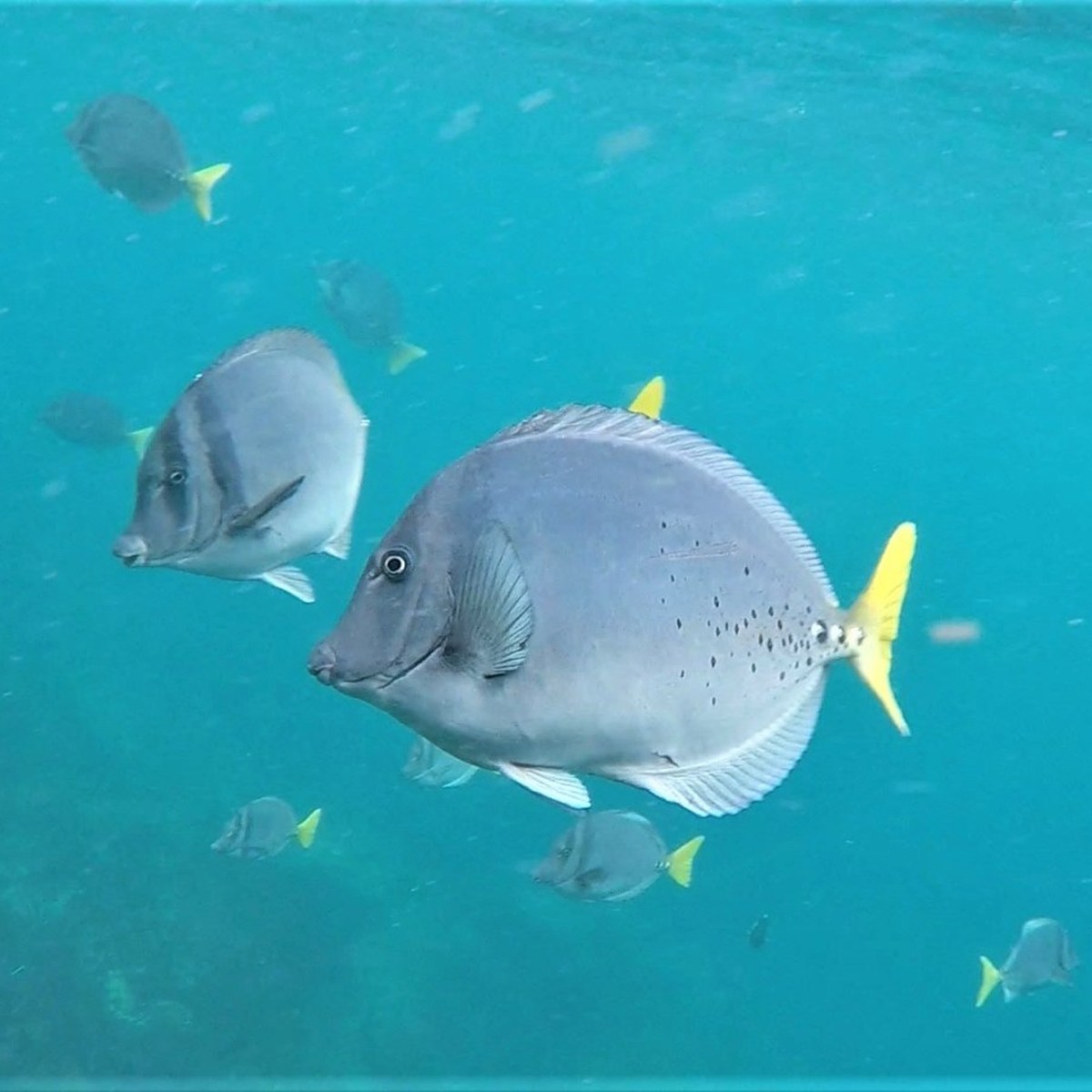 The Galapagos Island Reserve is a unique ‘living museum and showcase of evolution’. The islands are (or should be) on everyone’s bucket list of places to visit. They do not disappoint.

Many travelers combine a trip to the Galapagos with a tour of Machu Picchu (see our post).

Because the Galapagos archipelago is comprised of 127 islands, the best way to get around is by boat. When planning a Galapagos trip, it becomes obvious that snorkeling is a huge part of it. It is advertised as something you need to experience. If you are not a swimmer (or barely can swim like myself), this may present a problem. I had snorkeled before but nowhere as challenging as in the middle of the Pacific Ocean, 1,000 km from continental Ecuador.

Opting for a land tour exclusively was not an option, as my husband is an excellent swimmer who wanted to experience the Galapagos Marine Reserve, all 146,000 square km of it. Also, our research had shown that people who had booked land tours spent a lot of time sitting inside a boat traveling from island to island, or sitting on a beach. Neither of these prospects appealed to either of us.

Another consideration when planning our trip was the fact that the Galapagos government controls the number of people that can visit at any one time. This means reservations have to be made way in advance. It is best to have a reputable cruise line or agency make all the plans.

In the end, we selected an 8 day Silversea Expedition cruise (western route) (approx 120 passengers). No regrets. There are several luxury liners that offer Galapagos tours. The larger cruise boats (larger than 40 people) have more options for non-swimmers as they have more activities in general.

As I explain later in this blog, I did a lot more snorkeling than I ever imaged and thoroughly loved it. There were others on our trip who were not strong swimmers and they also found that the water activities were manageable and enjoyable.

Flying in, you have airports on two islands (Baltra and San Cristobal), both receive traffic from continental Ecuador.  Daily flights to the Galapagos Islands depart from the cities of Quito and Guayaquil on mainland Ecuador.

We took a flight from Guayaquil, Equador to Baltra where we boarded the Silver Galapagos and started the journey, first stop was the island of Santiago.

The western islands have itineraries that include Isabela Island and Fernandina Island, the furthest west in the archipelago and one of the youngest islands. It has less vegetation than some of the other commonly visited islands. Wildlife we saw on Fernandina includes the flightless cormorant, Galapagos penguin, blue and red footed booby, sea lion, fur seal, Sally Lightfoot crab, snakes and the Galapagos hawk.

Isabela Island is on the western router and beside Fernandina. Cruises to the west islands often crisscross the channel between the two islands. On Isabela Island we saw penguins, cormorants, boobies, Galapagos doves, Galapagos hawks, marine iguanas, land iguanas and giant tortoises.

The south island itineraries tend to visit Espanola Island, Floreana Island and often San Cristobal, and sometimes some of the other centrally located Islands. Espanola Island is the furthest south in the Galapagos Islands. Suarez Point on Espanola boasts a wealth of Galapagos birdlife including the waved albatross, and a stunning blowhole (geyser). The Silversea 8 day cruise includes Floreana and San Cristobal but not Espanola.

On Floreana Island, Silversea stopped at the green tinged beach at Punta Cormorant, where we saw the flamingo, Sally Lightfoot crab, green sea turtle and the blue footed booby. Post Office Bay with its antiquated postal system, still in operation today was a fun and interesting spot we visited.

Some of the main differences between the western and southern routes include:

Snorkeling and diving in The Galapagos Marine Reserve

The Galapagos Marine Reserve is an underwater wildlife spectacle with abundant life ranging from corals to sharks to penguins to marine mammals. Few places in the world can offer the experience of diving or snorkeling with such a diversity of marine life forms that are so familiar with human beings, that they accompany divers and snorkelers.

Many of the creatures that call the islands home are unique.  These are the islands that were famously referred to as “a world within itself”by Charles Darwin.

Silversea Expeditions provide the gear required for snorkeling and diving, although some enthusiasts brought their own. The itinerary does not reference swimming level requirements for participation in the water activities. As I mentioned, am not a strong swimmer (understatement) and I fretted for weeks beforehand.

The only piece of gear I brought with me was a light snorkeling vest. It provided just the right amount of buoyancy I needed to stay afloat but still move around. The guides became quickly aware of the fact that I was somewhat of a novice and were especially careful to watch out for me at all times. The experience was worth the fretting.

While novice divers can get underwater at Academy Bay in Puerto Ayora, all the spectacular diving sites in the Galapagos are limited to intermediate and advanced divers. The deeper waters, strong eddies, currents and surface waves lead to unexpected situations that novices may not be able to handle. Also, the colder waters and sometimes low visibility in places add to the difficulty, and the sharp volcanic rocks on the shores offer another threat. Even for advanced divers going deep, note that there is only one decompression chamber in the Galapagos. The Islands offer drift dives, deep dives, reef dives, and shark dives.

Both diving and snorkeling locations are planned on the Silversea itinerary but are subject to change, depending on the currents and winds. Several times, our guides decided that snorkeling in a regularly used location was too dangerous because of the particular weather pattern that day. The guides make every effort to find an appropriate location for a planned itinerary.

The Galapagos has two distinct seasons. The warmer, rainy season runs December to May with water temperatures typically 68°F to 82°F (20°C to 28°C), but rainfall is relatively light and more prevalent in the highlands. This is also the busier high season with higher prices, particularly during Christmas, Carnival and Easter. The cooler, drier season runs June to November with water temperatures often a colder 59°F to 72°F (15°C to 22°C), while increasingly rough seas make diving more challenging. It is far more comfortable diving and snorkeling in the warmer season when seas are calmer, but often there is even more plentiful marine life in the cooler season.

The main threats to the Galapagos are the introduction of invasive species, increased tourism, demographic growth, illegal fishing and governance issues. These issues are constantly analyzed and monitored in order to adequately manage them and reinforce strategies to minimize their impact.

The Marine management imposes some limitations on the exercise of the rights of people living in this geographical area, but also provides them with preferential rights to use the natural resources sustainably.

Charles Darwin and the Galapagos

The ongoing seismic and volcanic processes, together with the extreme isolation of the islands, led to the development of unusual animal life – such as the land iguana, the giant tortoise and the many types of finch – that inspired Charles Darwin’s theory of evolution by natural selection following his visit in 1835. His observations on the island led to his famous book “Origin of the Species”, a controversial scientific view on the biological origin of life.

The origin of the flora and fauna of the Galapagos has been of great interest to people ever since the publication of the “Voyage of the Beagle” by Charles Darwin in 1839.

Beagle sailed from Plymouth Sound on 27 December 1831 until October 2, 1836. The book is a vivid travel memoir as well as a detailed scientific field journal covering biology, geology, and anthropology that demonstrates Darwin’s keen powers of observation, written at a time when Western Europeans were exploring and charting the whole world.

The islands constitute an almost unique example of how ecological, evolutionary and bio-geographic processes influence the flora and fauna on both specific islands as well as the entire archipelago. Darwin’s finches, mockingbirds, land snails, giant tortoises and a number of plant and insect groups represent some of the best examples of adaptive radiation which still continues today.

Hot Spots are responsible for the formation of Hawaii, the Galápagos, and other island chains. The mantle plume or hot spot is the area of intense heat that deforms the land above it. The crustal plate rides over the hot spot and is occasionally perforated by the molten rock that is rising from the earth’s mantle. The crust above is forced upward because of the heat, and volcanoes are formed.

The previously formed islands then move slowly away from the hot spot, making room for new islands to be formed by further volcanic activity. The older volcanoes eventually become inactive and slowly erode into the ocean depths..

The site demonstrates the evolution of the younger volcanic areas in the west and the older islands in the east. On-going geological and geo-morphological processes, including recent volcanic eruptions, small seismic movements, and erosion provide key insights to the puzzle of the origin of the Galapagos Islands. Almost no other site in the world offers protection of such a complete continuum of geological and geomorphological features.

97% of the total emerged surface is the size of Italy and was declared a National Park in 1959. The marine reserve was created in 1986, and increased in size in 1998. Human settlements are restricted to the remaining 3% in specifically zoned rural and urban areas on five islands, Baltra, Floreana, Isabela, San Cristobal, and Santa Cruz.

The islands have relatively high species diversity for such young oceanic islands, and contain emblematic taxa or populations. They include giant tortoises and land iguanas, the most northerly species of penguin in the world, flightless cormorants as well as the historically important Darwin’s finches and Galapagos mockingbirds.

Darwin’s finches are a group of about 26 species of passerine birds, 13 of which are endemic to the Galapagos Islands.

Darwin observed that beak shape varied among finch species. He postulated that the beak of an ancestral species had adapted over time to equip the finches to acquire different food sources.

With the longer beaks, males were able to feed differently on their favourite cactus, the prickly pear. They were able to punch holes in the cactus fruit and eat the fleshy pulp. Those with shorter beaks tear apart the cactus base and eat the pulp and any insect larvae and pupae (both groups eat flowers and buds).

This process in which one species gives rise to multiple species that exploit different niches is called adaptive radiation. Depending on the food source of various islands, finch species would become adapted to different diets: seeds, insects, flowers, the blood of seabirds, and leaves.

Darwin called this mechanism of change natural selection. Natural selection, Darwin argued, was an inevitable outcome of three principles that operated in nature. First, the characteristics of organisms are inherited, or passed from parent to offspring. Second, more offspring are produced than are able to survive (resources are limited), and third, offspring vary among each other and those variations are inherited.

In summary, offspring with inherited characteristics that allow them to best compete for limited resources will survive and have more offspring than those who are less able to complete.