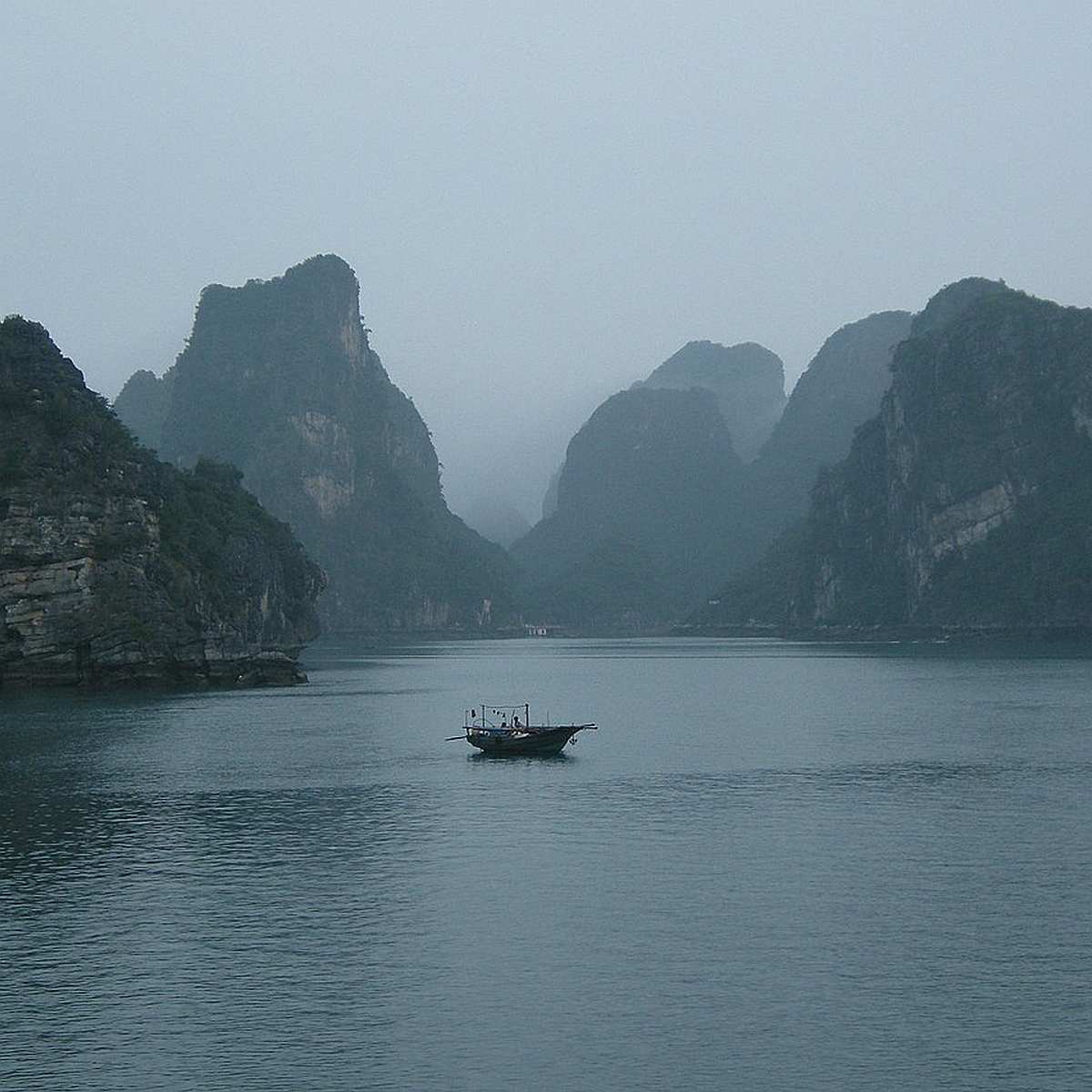 The Mekong Delta, Chan May/Danang and Ho Chi Minh City are the three places we would definitely recommend to a first time visitor to this wonderful country. As most of Vietnam is on water, it is a great place to see via tour boat. We decided that part of the trip would best be done by cruise ship and chose Silversea for a Mekong River cruise as part of our Vietnam tour. Our 10 day itinerary started in Hong Kong and one of the first stops was the iconic Halong Bay. 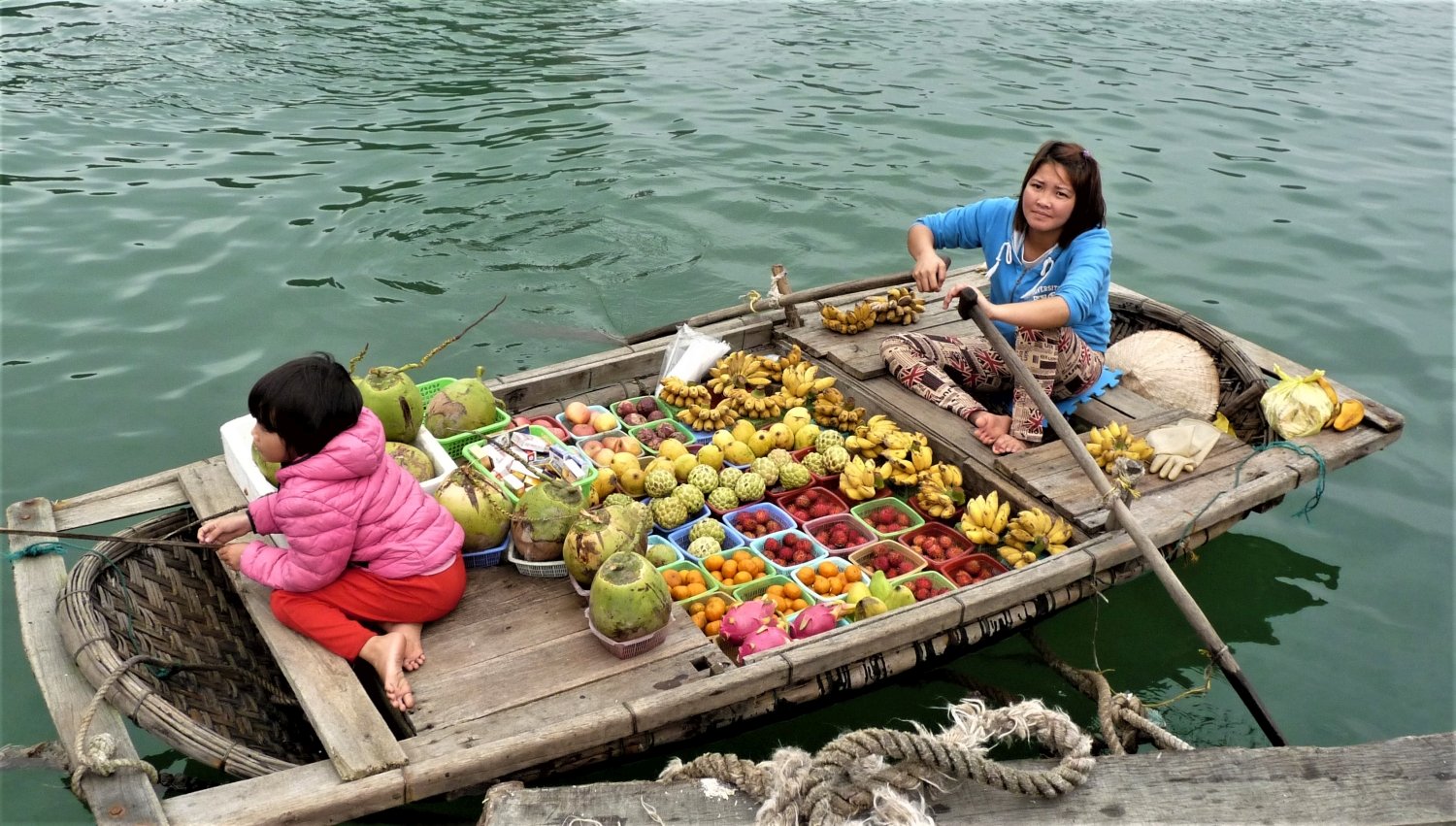 –The rich become deaf and the mighty blind –

Halong Bay is best explored by boat, it is prime cruising territory. We knew that we wanted to stay here at least overnight in order to experience the Bay at different times and lights. Most Vietnam cruises stay here 2 nights.

The Legend of Halong Bay has it that shortly after the formation of the country, the Mother Dragon helped the people of Vietnam to fight back against hostile invaders attempting to enter the country through the sea. Although the invaders were powerful and on the verge of winning, the dragons destroyed them in a blaze of fire. After their triumph in Halong Bay, the Mother Dragon and her children never returned to the heavens from which they were summoned.

The karst (soluble rock formation) seascape of Halong Bay is one of the world’s most iconic sea views and is a UNESCO World Heritage Site. Unesco’s World Heritage Committee in the year 1994 and later in 2000, chose Ha Long Bay as a stunning example of a place that represents a stage in the world’s geomorphologic history due to its original limestone features.

The area has experienced 500 million years in various geological states. Covering an area of approximately 1,500 km, there are more than 2000 islets sit within this bay in the Gulf of Tonkin, eroded into jagged pinnacles by wind and water action over millennia.

The floating village of Halong Bay has a population of about 1600 people. Residents of the bay mostly live on boats and rafts buoyed

by tires and plastic jugs to facilitate the fishing, cultivating and breeding of aquatic and marine species. The government is presently trying to relocate many of the residents to more stable areas as well as trying to preserve the Bay.

Although touted as a great place to swim, we found Halong Bay to be extremely polluted, as trash and debris are thrown directly into the Bay by the residents who live and work on their boats. Whether Halong Bay gets cleaned up will depend mainly on the success of the government’s attempt at relocating these residents. Until the clean up occurs, it is a great place to visit for a few days but not longer.

Chan May is the port that leads into the city of Da Nang. Da Nang has a history as a French colonial port, a coastal town that is known for its beaches. It is also a great stop to take in some Vietnamese modern culture, do some sightseeing and take some cooking classes. This is the new Vietnam, a modern city that has developed as a result of Vietnam’s economic boom.

The city was originally named Saigon and was the capital of South Vietnam until 1975, the end of the Vietnam war and the victory of North Vietnam. It was renamed Ho Chi Minh City, in honour of the first communist leader of North Vietnam. The city’s lure is its architecture which is a combination of modern classic and French Colonial, from the French Indochina period. It looked like no other Asian city that we had visited.

The Cu Chi tunnels is where the Viet Cong confused the Americans through a miracle of primitive technology. The guerrillas escaped from their enemies through a maze of resistant bomb tunnels that span nearly 200 km.

The Americans knew how important the tunnels were for the Viet Cong, the US army launched several campaigns to destroy this tunnel system, most notably, Operation Crimp and Operation Cedar Falls. However, because of the design of the tunnels and the fact that their size was almost never known, the attacks on them were never successful. Toward the end of the war, the tunnels had started to cave in due to the heavy bombing but they were never completely shut down. They were instrumental in the Viet Cong’s ability to survive to the end.

Most of these tunnels are too narrow for Western visitors, who quickly become claustrophobic, however, a small portion of the labyrinth has been enlarged to give tourists a glimpse of the city underground, Cu Chi. They are memorable to visit, but be ready for the short video presentation you are required to watch before you begin your tour of the tunnels. We noticed several Vietnam vets who were touring with us, cringing at the unabashed propaganda.

Caravelle Hotel – The hotel was opened to the public on Christmas Eve 1959, when the city was known as Saigon.

During the vietnam war, contemporary journalists worldwide wrote about this hotel. They noted the use of Italian marble, bullet-proof glass and a “state-of-the-art air-conditioning system and a Berliet private generator.”
The Caravelle was home to the Australian Embassy, the New Zealand Embassy, and the Saigon bureaus of NBC, ABC and CBS. It was the hub of communication with the west and played an important role in the Vietnam War.

The Manifesto of the Eighteen became better known as the Caravelle Manifesto after a press conference to announce it was held at the hotel. It was written in April,1960 as a public critique of the South Vietnamese government and talked of grievances which included the many restrictions on freedom. Its eighteen signatories were all old-time anti-communist politicians, with eleven of them ex-cabinet ministers and four who had been in other high government positions. After the November 1960 coup attempt, the government arrested most of the eighteen, and their Bloc disintegrated.

The Saigon Bar is still there with its spectacular sunset views and purple haze, overlooking Ho Chi Minh City. A sense of current history envelopes you as you ponder the conversations that must have taken place here as the vietnam war ravaged on.

Can Tho city in southern Vietnam sits on the left bank of the Hau Giang River, 90 miles southwest of Ho Chi Minh City . It is an industrial centre and the largest city of the flat delta region of the Mekong River, which includes the Ca Mau Peninsula and the principal rice-growing areas of the country. A large inland port, Can Tho is protected by dikes from the annual flooding of the Mekong.

We visited the Binh Hoa Phuoc Island and sampled the local delicacy, Elephant Ear Fish, a fish that is native to the Mekong.

Cai Rang floating market and the Phogn Dien floating markets, we found most of the Mekong specialties here. We saw boats full of rice, vegetables, fresh fruit from orchards, shrimp, fish, crabs, frogs and much more. You can even come across boats with household items and electronics.

One of the more unusual alcoholic beverages we have ever seen is made in vietnam. We experienced it at one of the Can Tho markets. Whole snakes are infused in rice wine or other alcohol, whereby the snake venom proteins are “unfolded” by the ethanol. This ‘unfolding’ supposedly makes the beverage safe to drink. It is said to be a restorative drink, it is drank in small shots. We were told that the snakes were inserted into the container while still alive and slowly drowned. Sometimes, the digestive tract is removed first, the snake is sewn back up and then inserted into the container. This is said to reduce the pungent smell of the wine.