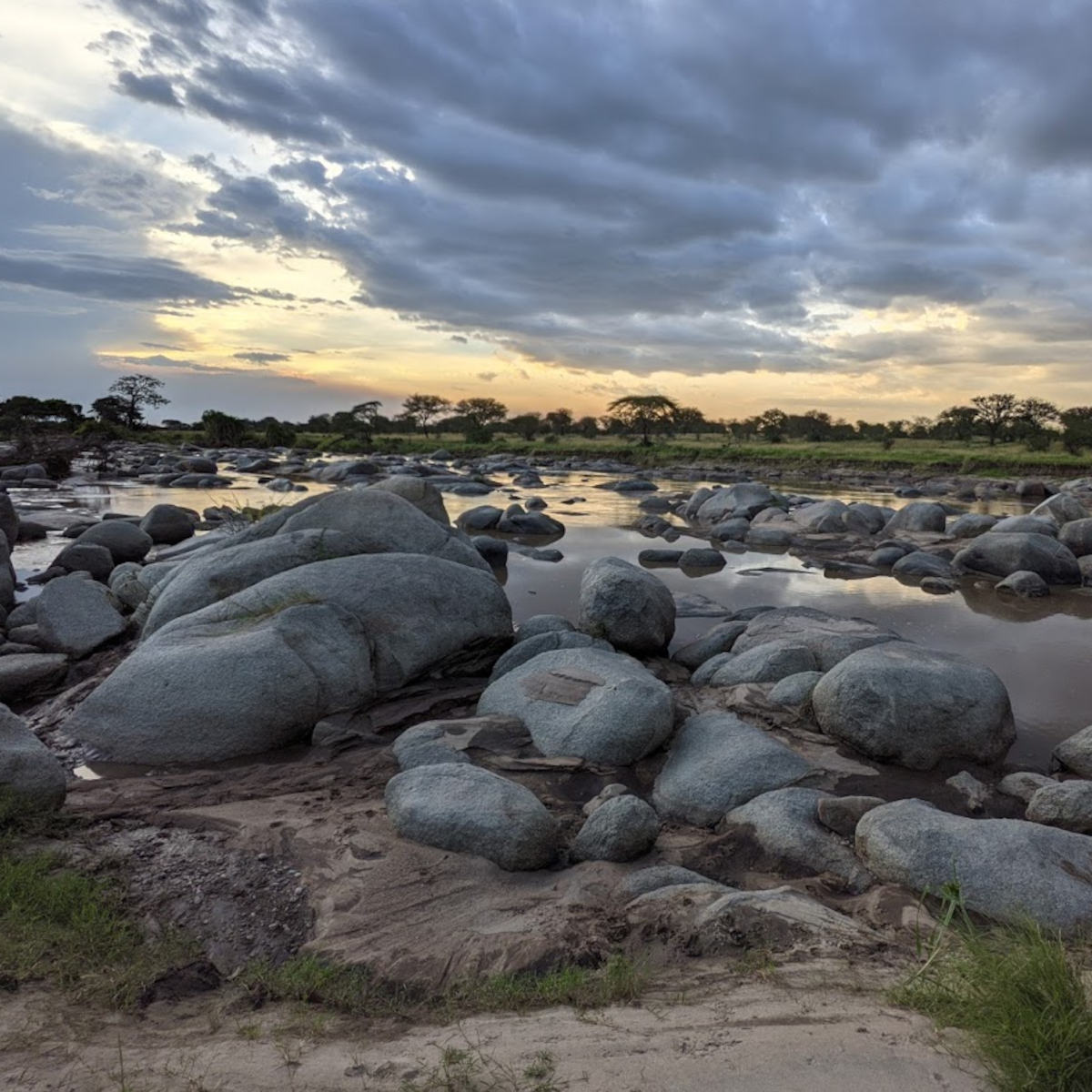 The Maasai Mara National Reserve and the Serengeti National Park are part of the same continuous ecosystem, which extends from southern Kenya into northern Tanzania. The ecosystem has 2 or 3 seasons depending on who you ask. The confusion lies in the fact that its rainy season is divided into a short rains season and a long-rains which are separated by a couple of stable months. Otherwise we’d call it 2 seasons (dry and rainy).

There’s a lot of emphasis on rainfall in the Serengeti-Mara because this is the primary variable impacting the migrating herds. In any given year, herds may alter both their migratory path and short-term movements quickly depending on local rainfall, and when macroweather events create droughts (like 2006), the migrating wildebeest and zebra travel longer distances between water and grasslands, which makes their offspring more vulnerable. See below for recent macroweather events.

Weather In the Serengeti

To say that the weather in the Serengeti is variable is an understatement. Below are two satellite images of the Serengeti-Mara ecosystem taken in the middle of wet season (January). It’s obvious that 2006 (photo on the left) was a drought year, while 2005 (photo on right) was normal.

How Floods and Drought Impact the Migration

Too much rain: Excessive rain dilutes plant nutrient concentrations, which affects lactating cows and lowers the nutritional value of grasses that calves desperately need, especially the smaller herbivores. Ironically, too much rain promotes fires because it increases fuel loads in the grasslands.

Too much rain also changes the migration pattern. In a very wet season, wildebeest may remain longer grazing in the southern Serengeti before migrating north to the Massai Mara.

Floods can also ruin it for tourists: in January, 2020, about 10 tourist camps and lodges near the Talek river (Maasai Mara) flooded, with game drives canceled and tourists being evacuated. One person (non-tourist) died (click here for news article).

Floods also create favourable conditions for the transmission of several diseases, including Rift Valley Fever and African horse sickness. Flooded rivers can also be the cause of mass drownings of wildebeest, in the thousands at a time, as summarized below:

Drought: Low rain amounts and dry grass triggers large fires which can interrupt migration patterns (herds won’t walk through the fire). Droughts can also cause outbreaks of infectious diseases in large animals, and can lead to under-nutrition; over half of the wildebeest deaths are caused by lack of food supply. For instance, during the short-term 1993 drought, nearly 400,000 wildebeest died due to water shortages in the Mara river.

More recently, in January 2006, seasonal rains were late and there was widespread drought in East Africa. It partially disrupted the migration of more than 1.5 million wildebeest, zebras, and other herbivores as they made their way from the Maasai Mara to the Serengeti.

The Serengeti-Mara seasons, month by month

The annual climatic year starts in November with short-rains:

Start of rains induces the herds to return towards the plains of southern Serengeti.

calving season: herds are on the nutrient-rich short grass plains of the southern Serengeti.

Rut season. herds keep moving north, some via the western corridor, others north towards Lobo, and reach the Mara

Herds spread out over expansive grasslands of northern Serengeti and Maasai Mara.

The table above reflects the weather in a ‘normal’ year. However there are some years that the entire ecosystem is disrupted by major weather events, including in 2020 when many lodges in the north were flooded. These events can’t be predicted, but below is a brief explanation of when these disruptions are likely to occur.

In general, the southeast Serengeti has less rainfall than the northwest, because of Lake Victoria’s effect and because of the rain shadow caused by the Ngorongoro highlands southeast of the Serengeti.

However, if there is a strong enough macroweather event, it can override Lake Victoria’s micro-climate, and produce more rainfall in the southeast, which is closer to the macroweather event coming from the Indian Ocean, and that can impact the migrating herds. The next section gives a summary of how macroweather is related to the Serenveti-Mara.

The Timing of Catastrophic Weather

WARNING: Boring Description of How Macroweather Influences the Migration

As mentioned elsewhere, both drought and excessive rain impact the migration. The Indian Ocean significantly influences the weather in East Africa through a phenomenon known as the Indian Ocean Dipole (or Indian Niño). The term dipole just refers to the shift from warm to cool sea temperatures across east and west shores of the Indian Ocean.

The change in sea surface temperature triggers variations in winds due to convection (hot air rises, cool air descends). Rain bands and these convection winds always move towards whichever region is warmer, helped along by the prevailing easterlies at the equator.

The dipole occurs in 3 phases. It’s a negative phase when cooler sea temperature is near Africa (warmer temperature near Australia), as in the first graphic below.

When the dipole phase is positive, as in the graphic immediately above, warmer sea temperatures are near Africa and this causes hot humid air to rise and to release rain when it cools. The winds push the rain bands westward to Africa, helped by the prevailing easterlies.

When sea surface temperature is balanced along the equator between east and west, it’s considered neutral.

A similar phenomenon occurs in the Pacific Ocean: when ocean surface transitions warmer it is called El Niño (positive phase), and the cooling ocean surface is known as La Niña (negative phase).

Does the Pacific Ocean influence weather in East Africa? Yes, because strong prevailing easterly winds at the equator push water from the Pacific through the Indonesian islands into the Indian Ocean.

Even if the two ocean systems don’t coincide, there is some predictability. For instance, it is fairly predictable that in East Africa, the variability of the short-rains season (November-December) is linked to the development of El Niño (above average rainfall) or La Niña (below-average rainfall). The long-rains season (March, April, May) isn’t as strongly associated.

Examples of macroweather impacting the migration

While weather can’t be predicted a year in advance, a basic awareness of macroweather phenomena might optimize your near-term trip planning.

This post isn’t intended to provide you with weather forecasting ability, but here are the takeaways: