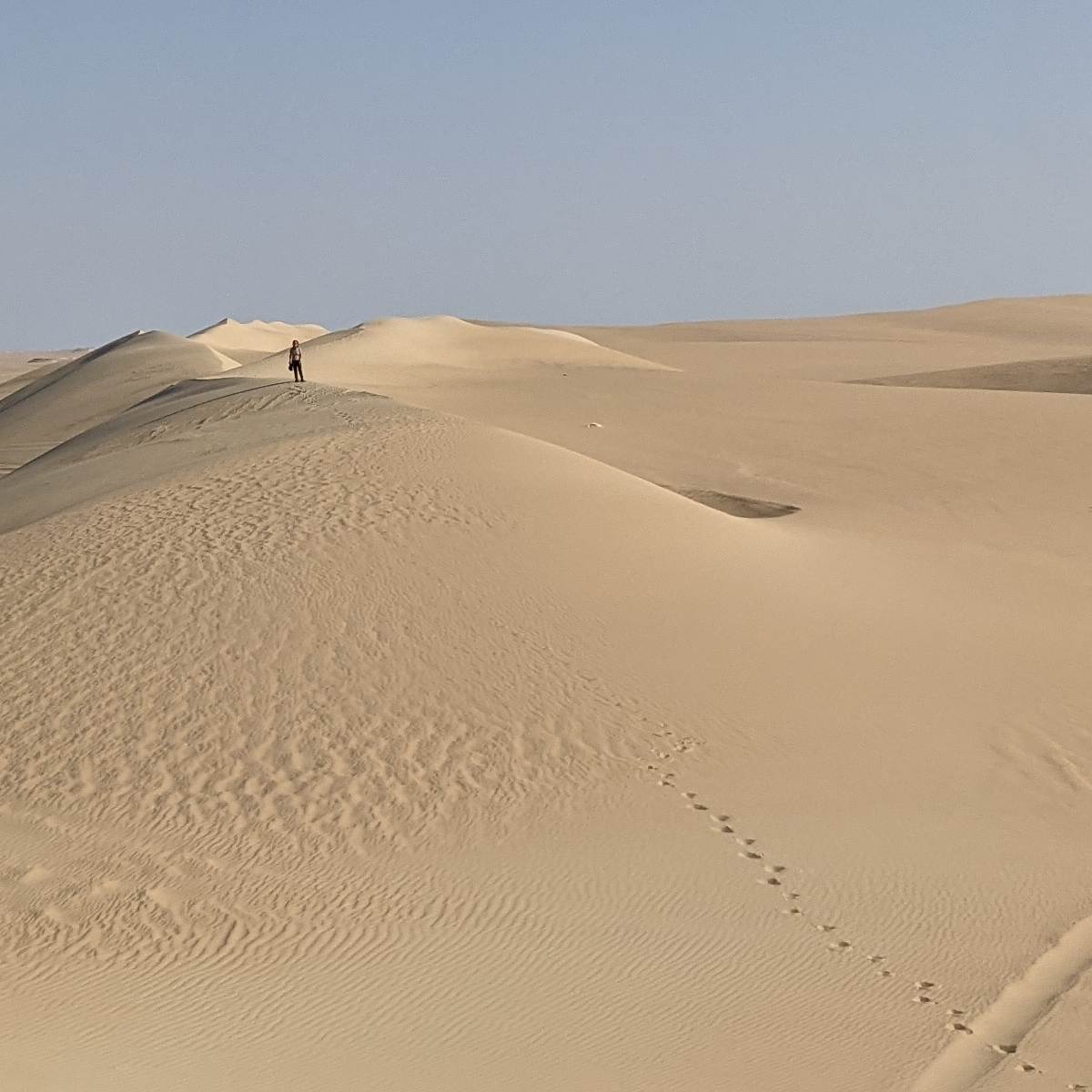 A trip to Siwa, Egypt is an exploration into a remote Egyptian community consisting mostly of Berbers, a Muslim ethnic group. There are very few places on earth that have been as culturally and geographically isolated as Siwa.

It is not an easy place to get to and staying there even for a few days presents its challenges but if you enjoy delving into different cultures, Siwa is a unique one. The pristine desert landscape around Siwa is a bonus.

Egypt’s Western Desert is a plateau on average about 500 feet above sea level, lying west of the Nile up to the Libyan border and south from the Mediterranean Sea to the border with Sudan. For the most part, this desert is dark brown with occasional shrubs and rather flat, without any of the romantic desert characteristics. However, the part of the Western Desert that lies just west against the Libyan border is called the Great Sand Sea and is right out of a Hollywood movie with wind-formed dunes and an oasis (Siwa).

The Siwans are a very isolated community of Berbers who have developed a unique language called Siwi, but most are fluent in an Egyptian dialect of Arabic called Masry (Egyptian). The Siwa Berbers have more in common with Libya (huge Berber population and only 40 km away), than with Egypt (very small Berber population).

They prefer to marry only Siwans but we were told by the locals that Bedouin brides command a higher dowry than Berber brides. No explanation for this was offered. The relations with the Bedouin are generally friendly whereby one Berber family and all descendants maintain a friendship with a Bedouin family (and its descendants).

In order to savour the local cuisine (our hotel did make a few dishes), we asked if the chef at our hotel restaurant would prepare the typical camel stew, we of course would buy the camel meat. Although camel is not eaten frequently and not as common as lamb, the Siwans we met told us they did eat it. We tried some of the local restaurants and aside from the fact that everyone smokes everywhere, the local cuisine is simple but tasty fare, stews, grilled meats and salads. We did not see any women servers in restaurants, at the butcher shop or women salespeople anywhere along the shopping area.

The Women of Siwa

The Siwa women are rarely seen in public. They are forbidden from controlling any type of vehicle, and are required to be driven by a related male, even as young as 10. Contact between unmarried people is prohibited, therefore most marriages are arranged. The educational level of women over 30 is nil and for girls under 18, about 50%. Tradition forbids women from riding a bike or driving a carriage.

It is debatable whether women in Muslim societies are gaining independence and to what degree, in isolated places like Siwa, no progress seems to have been made. These women wear Burkas which cover the entire body including head and face with a mesh screen over the eyes. Some of the women wore a niqab, leaving both eyes partly uncovered, but the majority had their eyes covered over with a black mesh. They appeared as walking ghosts.

Central Siwa’s 13th century mud brick fortress is composed of spectacular organic shapes, it was built from chunks of salt from the lake just outside town, mixed with rock and plastered in local clay. The buildings were originally four or five storeys high and housed hundreds of people, few visitors were admitted inside.

In 1926 rains caused extreme damage to the buildings, making them almost uninhabitable and the residents started moving to newer and more comfortable houses with running water and electricity. Today, a few buildings of the buildings are occupied and some are used as storage, while some of the buildings are being repurposed as bed and breakfast inns. We visited one of the Inns currently operating and got a tour, it was very basic but nice views from the outside dining area. From the central square, you can get to the top of the fortress throughout a passageway for panoramic photographs of the town below.

Mountain of the Dead contains nearly 3000 Pharaonic tombs which are situated on its terraces and on the sides of the conical part. The mountain of the dead has a large number of mummies that date back to the 26th dynasty which is the Greek and the Roman period, there are no Christian burials.

One of the most famous tombs is that of Si-Amun, recently discovered (1940s) which dates to about the 3rd century BC and is considered the most beautiful one in the oasis.  Some of its decorations were badly damaged by Siwa soldiers who cut off some of the plaster.

Only a few of the tombs are open at one time so that they do not get over exposed to light from the outside, you do not get to choose which tomb you see. The colours inside the tomb we were allowed into were incredibly well preserved.

Temple of the Oracle

The Oasis is known to have been settled from the 10th millennium, BC, the earliest evidence of any connection with Ancient Egypt is the 26th Dynasty, when a necropolis (city of the dead) was established. Ancient Greek settlers at Cyrene made contact with the oasis around the same time (7th century BC), the oracle temple of Amun was built in the 6th century BC by Alexander the Great.

During his campaign to conquer the Persian Empire, Alexander the Great reached the oasis, supposedly by following birds across the desert, where the oracle confirmed him as both a divine personage and the legitimate Pharaoh of Egypt. Needless to say, much of this is contested by historians.

Siwa has 9 salt lakes, they are famous for their salt purity and are 5 times more saline than the oceans. Salt is harvested commercially for both for industrial use and culinary export and the locals visit these salt flats to take salt they need for home use. We’re not sure why the animal carcasses were dumped in the picture below at these salt flats.

The Siwa community applies strict Islamic rules so alcohol is forbidden although it’s not against Egyptian law to consume it. We asked our hotel bartender for beer after we had been in the desert for 8 hours. He suggested we instead try a refreshing hot tea. Although we knew that alcohol was forbidden generally in Siwa, we did not realize that the Muslim run hotels (the majority hotels) did not carry any beer or wine.

The date farmers make a drink called aragi (Siwa moonshine made from fermented dates), but such a drink is consumed at home and not sold in stores. We were advised that in order to get beer (wine was out of the question), we needed to find a Christian hotel. Since the pandemic many hotels are no longer operating, but we did manage to find a Christian hotel and roused someone eager to sell us beer in a bag for an inflated price.

Prior to the pandemic, choices for accommodation in Siwa were not plentiful but adequate. The pandemic has relegated even the ‘best’ hotels with little or no maintenance or services. We drove around looking for hotels (while trying to find beer), and came across several places that must have been very nice when operating properly, but were shuttered or had no services.

One of the tourist stops is Cleopatra’s Spring or Bath. The water is said to come from an underwater spring that is supposedly “so clear that it would be invisible if it were not in constant motion”. The natural stone pool is used for bathing, swimming, and relaxing. We found that the pool water was filthy, there was no constant movement and the attached restaurant was anything but welcoming.

Anthropologists have been interested in Siwa since 1900 when it was first reported that homosexuality was rampant on the Oasis and that it extended to a form of marriage. The anthropologist Count Byron de Prorok reported in 1937 that “homosexuality was not merely rampant but raging”. The practice involved a male and a young boy between the ages of 12 and 18, whose family had literally sold into servitude. Up to the year 1928, it was not unusual for actual agreements to exist which were called marriage contracts between two males. The German egyptologist Steindorff wrote that “the feast of marrying a boy was celebrated with great pomp”, and the money paid for a boy was much higher than money paid for a woman.

The practice was formally stopped in 1928 when King Fu’ad visited the Oasis and completely forbid any future marriage contracts between two males, although the practice is said to have continued in secrecy and without an actual contract until the end of WWII. Siwans are not open to discussing the homosexuality of the past and in fact, want it removed from historical records as well as literature. When the Siwan anthropologist Fathi Malin in his book Oasis Siwa, written in 2001, included a poem from a man to a youth, the tribal council demanded it be removed from the book or he would be expelled from the community.

When we brought up the subject with our guide (an egyptologist), he discounted our questions and said that the practice had never existed.

Siwa is about a 10 hour drive from Cairo (560km) going west, almost to the Libyan border. In order to get here, we had to go through several military checkpoints. About 20 km before arriving in Siwa, we were joined by a police escort, and police presence remained through our visit. We were told that any change to our itinerary (including hotel change) would require 48 hours for approval from the police. The reason for the heightened security was not revealed, we believe it was the fact that we were only 40 kilometers from the Libyan border.