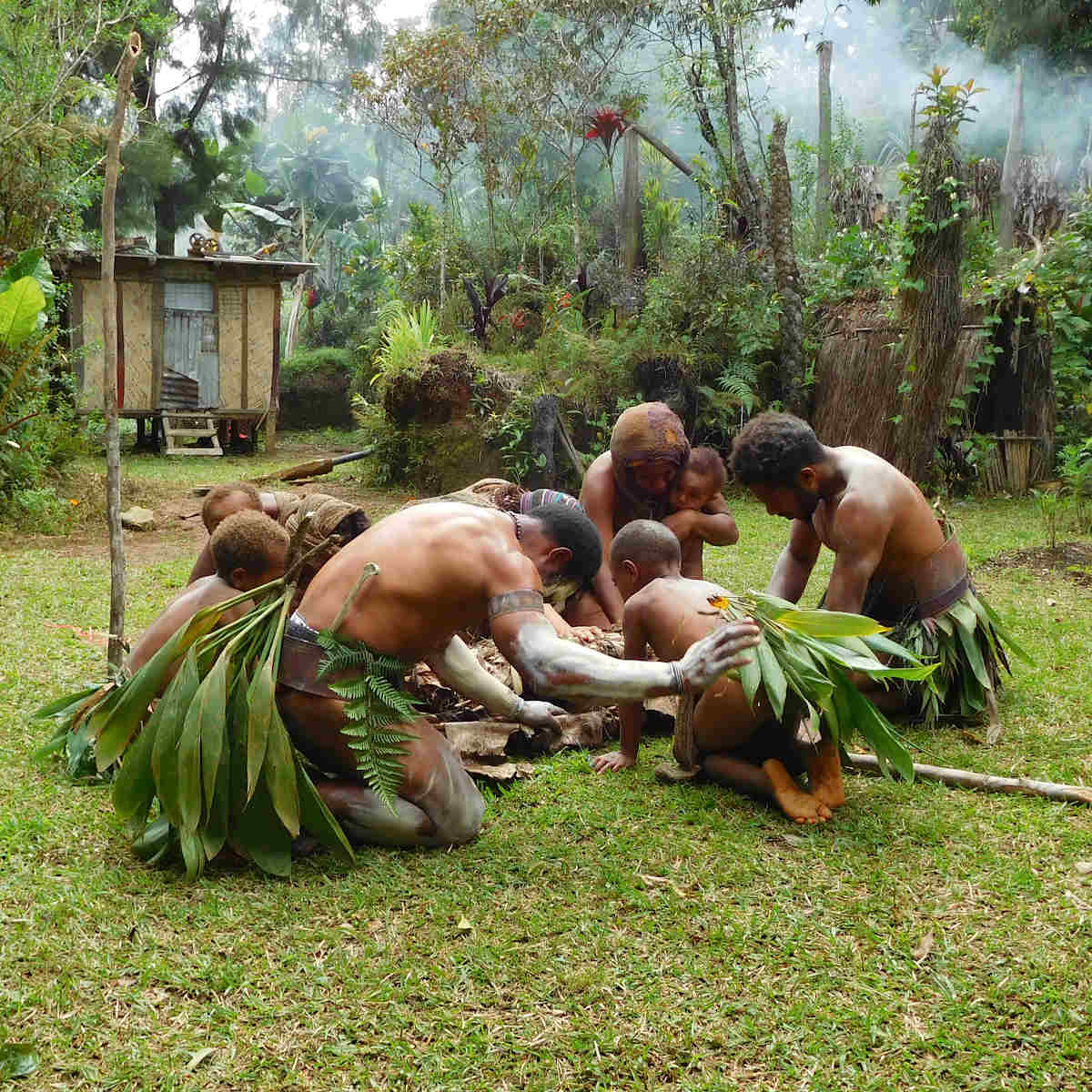 Papua New Guinea is one of the least visited places on earth. Once you start planning you trip to the highlands you see why. It is not easy to get here and staying safe is a challenge. However, it is well worth the effort. It has one of the most diverse cultures in the world, reflected in its tiny villages dotted throughout the island, each having its own customs and language. This is a really special place.

It is a developing country with 8 million people, 851 languages.  Only a few airlines currently fly to the capital, Port Moresby.  Because of the political climate, you cannot fly there from Indonesia, which makes it very difficult in planning an itinerary.  Direct flights can be had only from Australia, Hong Kong, Kuala Lumpur, Manila and Tokyo. Violent crimes are common especially around the capital.  Port Moresby, the capital is known for its violent crime and it is not an enchanting place. However, it is not as bad as its reputation and an overnight stay may be necessary. It does have some nice hotels, such as Gateway.

Western Highlands covers an area of 8,500 km², and there are close to half a million inhabitants. The provincial capital, Mt. Hagen is a bit of a wild, frontier town. Much of the province’s income comes from coffee production; it also sends large quantities of sweet potato, potatoes and other vegetables down to the lowlands. The province has some good walks and is popular with birdwatchers and culture enthusiasts.

Rondon Ridge Lodge in the Western Highlands is not just a lodge but a destination in itself. Distance from Port Moresby to Western Highlands is 330 miles and can be reached by airplane in about 1 hour and a half. The lodge is a 45 minute drive from the airport in Mount Hagen, the capital of the Western Highlands. At an elevation of 2,100 meters, it is really cool compared to the rest of the island. It also has the distinction of having hosted Mick Jagger in 2014, who flew to the island on his own airplane. The Lodge attendants remember his generosity and his bigger than life voice. Our driver, who had been Mick’s driver, said he had had a very positive experience driving Mick around.

Pig Roast at the Rondon Ridge grounds in the Western Highlands

When we travel to out of the way places, we try and get the villagers to share their local dishes and we love to participate in the preparation, if we can. We asked our guide and driver what they would consider to be a “special dinner”. Consensus was a small pig, cooked in their traditional way, something they eat only on special occasions, as pork is not cheap in PNG. We offered to pay for a pig if they would select it, cook it and have us participate in the event.

Our driver was thrilled at the suggestion, he immediately began recruiting villagers to come to the Rondon Ridge Lodge grounds to make their traditional pork belly and stuffed intestines. He asked one of the villagers to go into town to select the pig from the right vendor, and to make sure he was getting a bargain price. The lodge could not put its seal of approval on this dinner and we could not use their facilities but the lodge did agree to give us the water required for the cleaning.

Preparation for the pig roast included taking out the internal organs and cleaning them. I made sure that the water was replaced constantly while the cleaning process was taking place. The pig stomach and the intestines were then stuffed with carrots, celery and other vegetables and herbs, plus some of the organ meats that had been cut up very small. The carcass of the pig was then cut in half and placed on an open wood fire in order to burn off the skin surface. A pit was made and burning logs taken from the fire were placed at the bottom of the pit with some rocks on top and then huge banana leaves on top of the rocks. The stuffed intestines, stuffed stomach and the pig carcass as well as whole potatoes were then placed on the leaves, all were covered with more banana leaves and left for about three hours to cook.

Once cooked, the stuffed stomach, the most valued part of the pig, was cut into slices. It is usually given to the owner (or donor) of the pig. The stuffed intestines were also cut into slices and the pork carcass was cut into strips, pork ribs. Nothing was thrown away and all was eaten. The villagers insisted we take a large piece of the stomach but we declined, taking only a very small tasting portion. We left the villagers to enjoy their feast and had dinner at the lodge with the first course being a very delicious pork intestine and stomach recipe with ribs and potatoes on the side.

When asked if we had run into any violent or threatening incident in PNG, we like to tell the story of the ‘road toll collectors’.

On our way to one of the villages, we encountered a group of machete wielding ‘road toll collectors’ who had set up a roadblock claiming that a toll was being collected for the repair of the bridge we wanted to cross. Of course, no repair had been done by this group and the ‘toll’ they were asking for was only a few US dollars. We noticed that they were carrying big machetes, so although they were all smiles and seemed non threatening, they were armed and that was threatening. Our driver told them he had no money and that they were not getting a ‘toll’. They insisted we could not pass. We had noticed that the car ahead of us had paid them. From our point of view, it was not worth the effort of arguing with them, given the small amount they wanted. In spite of our driver’s reluctance, we gave them the ‘toll’ and went on our way. Our driver had run into the situation before, he told us that this is not be only place in the Highlands where this happens, he did not want to encourage the behavior and was almost embarrassed by it.

The Villages of Papua New Guinea

There is very little written about the villages in the Western Highlands. Recent studies have suggested that because of the higher altitudes, the villagers are shorter, have slimmer waistlines and larger lung capacity when compared to the lowlanders. They also have a higher concentration of hemoglobin, the red blood cell proteins that carry oxygen throughout the body. From one village to the next, residents speak different languages, over 850 languages are spoken on the island. Villagers grow sweet potatoes, pineapples, bananas and hunt for possum and wild pig.

The Kolgni village was the closest to the Rondon Lodge and the most visited. Their re-enactment included a burial rite using a wild hog, who was eventually killed. This was a lovely village with huge banana trees and lush vegetation.

The village is tiny and has what used to be a menstruation house for women. The local village dance was performed by children who had taken time off from school. They were going back to class as soon as the dance was over. In this village it appeared that most of the children were attending primary school, we found in other villages that many of the children were not going to school.

The village of Moike had a Patriarch with several wives. We asked each of the wives if she was jealous of the other wives, did the husband’s attention paid to the other wives bother them or make them jealous. They replied that they would rather the husband pay more attention to the others and leave them alone. They were not joking.

The Mudmen of Papua New Guinea have lived here for 1000 years. According to legend, the Pogla people were attacked by another tribe where only the men escaped. In order to take back the women and children, the men needed to disguise themselves. The mud from the Asaro River was their first choice but they became convinced that it was poisonous so they created masks from objects they found around the river. Donning their masks, they approached the enemy who believed they were spirits and fled. The tribe was saved. The villagers perform a re-enactment of the retaking of their village. It is very entertaining and the masks are exquisite.

The village of Nin’s Patriarch was an interesting fellow who prepared all kinds of entertainment for us. He met us with a bow and arrow, ready to shoot! The family was welcoming and it was obvious they were very poor. Their baby son was extremely malnourished. They invited us into their home and showed us how they started a fire for food preparation.

Visiting the villages in Papua New Guinea will render lifetime memories. Although the villagers may no longer wear their tribal costumes all the time, their lives have not changed much. They do not have running water, electricity or sanitation. Some of the children attend primary school in a larger village nearby but beyond primary school, there are no resources. In fact, only about 50% of children are even able to attend primary school, limited resources and lack of trained teachers mean a very low education level.