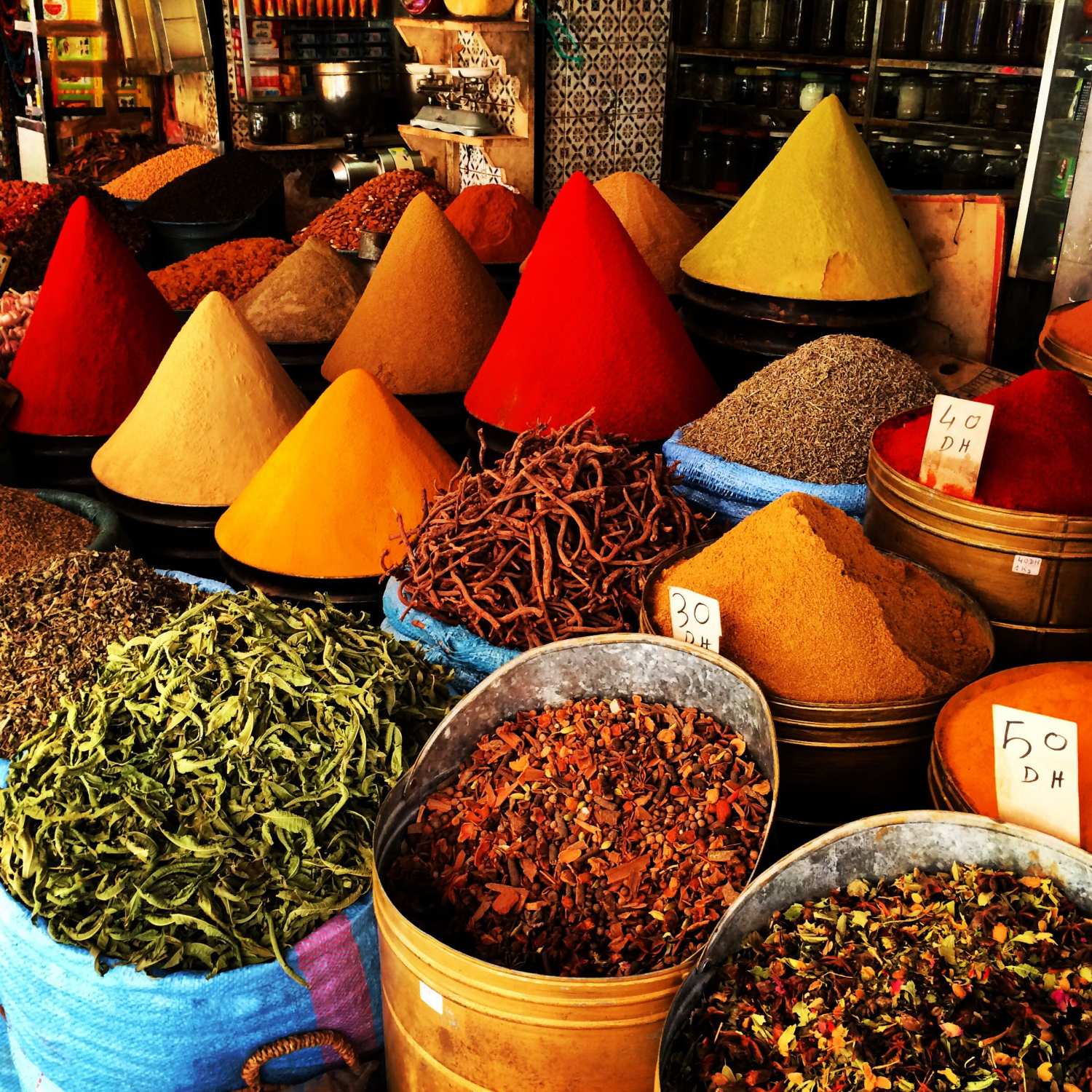 Morocco and Tunisia tempt the imagination with mysterious caravans, expansive deserts and romantic getaways. Our trip to Morocco included the cities of Marrakesh, Casablanca, Fez and the Atlas Mountains. In Tunisia we visited the cities of Carthage and Tunis. Like Egypt (see our post on Egypt), this area is rich in ancient history.

Even the loftiest of mountains begins on the ground – Moroccan proverb

The Sahara is in the south and the Atlas Mountains are in the west. To the east we find the Nile.

The area of present-day Morocco has been inhabited since Paleolithic times, sometime between 190,000 and 90,000 BC. It is termed a “hybrid” democratic state and It is estimated that between 41% to 80% of residents have Berber ancestral origins. 99% of Moroccans are muslims with Sunnis comprising the majority. Christians make up 1% of the population. The two official languages are Arabic and Berber. Berber is a branch of the Afroasiatic language.

Casablanca, whose name is synonymous with the romantic era of 1940s Hollywood and the movie of the same name, is Morocco’s largest city. Western travelers are utterly disappointed to learn that the inspiration for the film was a bar in Tangier, that the film itself was shot entirely in California and that Casablanca does not look at all like it did in the movie.

It is the country’s commercial hub and home to the largest airport, it does not have the soul of Marrakesh nor the culture of Fes. For these reasons, most visitors fly into Casablanca and then fly out to somewhere else. We decided to include it in our itinerary and hired a guide to give us a tour of the city.

The highlight of the city is most certainly the Hassan II mosque. Having been to several Muslim countries and visited many mosques, we can say that this one is surely one of the most spectacular in terms of size (second largest mosque in Africa) and decoration.

The minaret is 60 stories high topped by a laser, the light from which is directed towards Mecca. The walls are handcrafted marble and the roof is retractable.

Other notable sights are the Sidi Abderrahman Islet, a burial ground where the actual tombs on the outcrop take the shape of a series of little white domes. The tomb belongs to Sidi Abderrhamane Thaalibi, the founder of the Thaalibiya (now Algiers).

There is a Rick’s Cafe in the city and the locals say that this Casablanca landmark is the real Rick’s Café. A one day tour is adequate, two would be too many.

Marrakesh is a feast for the senses. Mysterious and beckoning, it has been a medina town, a place desert caravans converged upon, bringing in wonders from all over Morocco and the world beyond. It is a huge, densely populated city with maze like alleys filled with souks, textiles, pottery, traditional jewelry, and visible for miles is the Moorish minaret of the 12th century mosque Koutoubia. The Medina, a world heritage site has high stone walls and is divided into Quarters. Each quarter has a mosque, a hammam (bathhouse), a communal bread oven, a madrasa (educational institution) and a water fountain, which all serve the local community.

If you want to stay in the old part of the city, the traditional riads are a great option – these are guesthouses that open up onto private, calm courtyards. They vary from homely little places with simple, traditionally-decorated rooms to grand places that have been converted from palaces.

The Atlas Mountains are primarily inhabited by the Berber population. They are part of the Maghed a sub-region of Africa – which separates the  Mediterranean and Atlantic coastlines from the Sahara Desert. These mountains are home to some of North Africa’s most remote villages, as well as several species of endangered wildlife.

Only 40 minutes away from the chaos and crowds of Marrakech – these mountains are rich with ravines and canyons, waterfalls and wild flowers. They attract not only hikers and skiers but those we want a view into a world where time has stood still. They have attracted some high-profile travelers, including Martin Scorsese, who shot parts of his film “Kundum” there in 1997.

The Berbers are the indigenous population of North Africa,  most likely originating from streams of people from Western Europe, sub-Saharan Africa, Northeast Africa, eventually settling in North Africa. The Berbers are considered Caucasoid Arabs, even though they have Sub-Saharan ancestry. They rely on cattle and agriculture as their main sources of income, and maintain a nomadic lifestyle closely resembling their ancestors. The name Berber is a foreign word to them, stemming from latin and they find it insulting. They call themselves Imazighen ( free men of the land).

Our visit with a local Berber family was genuine and warm. The home was built with rocks and clay brick and had very basic furnishings, a wood stove and small table as well as a small refrigerator. The Hammam outside was pretty nice – heated with a wood stove. They made their own olive oil and grew and raised everything they ate. This family had electricity but many did not. Some of the villagers still slept with their sheep and goats at night under the stars.

Fes is called the cultural capital of Morocco. It is the second largest city after Casablanca and is known for its thriving Medina, which is a Unesco world heritage site, recognized as one of the best preserved historic towns of the Arab-Muslim world. Its leather tannery is one of its main attractions.

The oldest tannery in the world and one of the iconic places in Fes is the Fes tannery, where they still operate as they did in medieval times. It is massive, surrounded by houses and shops, even though the smell of the dyeing process is intense. They tell you that rubbing your nose with mint leaves will help.

Although non-muslims cannot enter the Al Quaraouiyine Mosque, built in 859 BC by Fatima al-Fihri, you can enter the library and peak inside.

Other interesting things in Fez are: Dar el Makhzen, the royal palace of Fes, the Al-Attarine Madrasa which is a historical market, and Merenid Tombs, housing the skeletons of the sultans.

Tunisia is in the Maghed region of North Africa and is considered to be the only fully democratic sovereign state in the arab world. In ancient times, Tunisia was primarily inhabited by Berbers,  Phoenecian immigration began in the 12th century BC; these immigrants founded Carthage. In modern times, close relations with Europe, in particular with France and with Italy have been forged through economic cooperation, privatization and industrial modernization.

The capital and largest city is Tunis and Carthage is a wealthy suburb.

Throughout history, Carthage’s important location as the gateway to Northern Africa has resulted in the fascinating archaeological site that exists today. Rome destroyed Carthage in 146 B.C. thereby ending the Punic Wars. Julius Caesar ordered a new city to be built on top of the Phoenician foundation. Carthage was also the capital of a Vandal kingdom and the Byzantine province of Africa around 435-534 A.D. before Emperor Justinian reacquired it for the Eastern Roman Empire. Carthage comprises the vestiges of Punic, Roman, Vandal, Paleochristian and Arab presence.  The major known components of the site are the acropolis of Byrsa, the Punic ports, the Punic tophet, the necropolises, theatre, amphitheatre, circus, residential area, basilicas, the Antonin baths, Malaga cisterns and the archaeological reserve.

The area of Roman Carthage can be into four quarters, Cartagenna, Dermèche, Byrsa and La Malga. Cartagenna and Dermèche correspond with the lower city, including the site of Punic Carthage; Byrsa is associated with the upper city, which in Punic times was a walled citadel above the harbour; and La Malga is linked with the more remote parts of the upper city in Roman times.

Although urban sprawl during the first half of the 20th century has resulted in some damage to its integrity, the site of Carthage has essentially retained the elements that characterize the antique town: urban network, meeting place (forum), recreation (theatre), leisure (baths), worship (temples), residential area, etc. The conservation of the site guarantees the maintenance of the intact character of the structures.  The site of Carthage benefits from the listing of a large number of its remains as historic monuments (since 1885).

We stayed at the Residence Hotel, an impressive hotel situated on the seafront in the district of Gammarth, close the Carthage ruins and the famous artists’ colony Sidi Bou Said.

It is just 20 minutes from the centre of Tunis, and 25 minutes from Tunis-Carthage International Airport. The hotel decoration was inspired by Tunisia’s Arab-Andalusian heritage and it makes for a memorable stay.