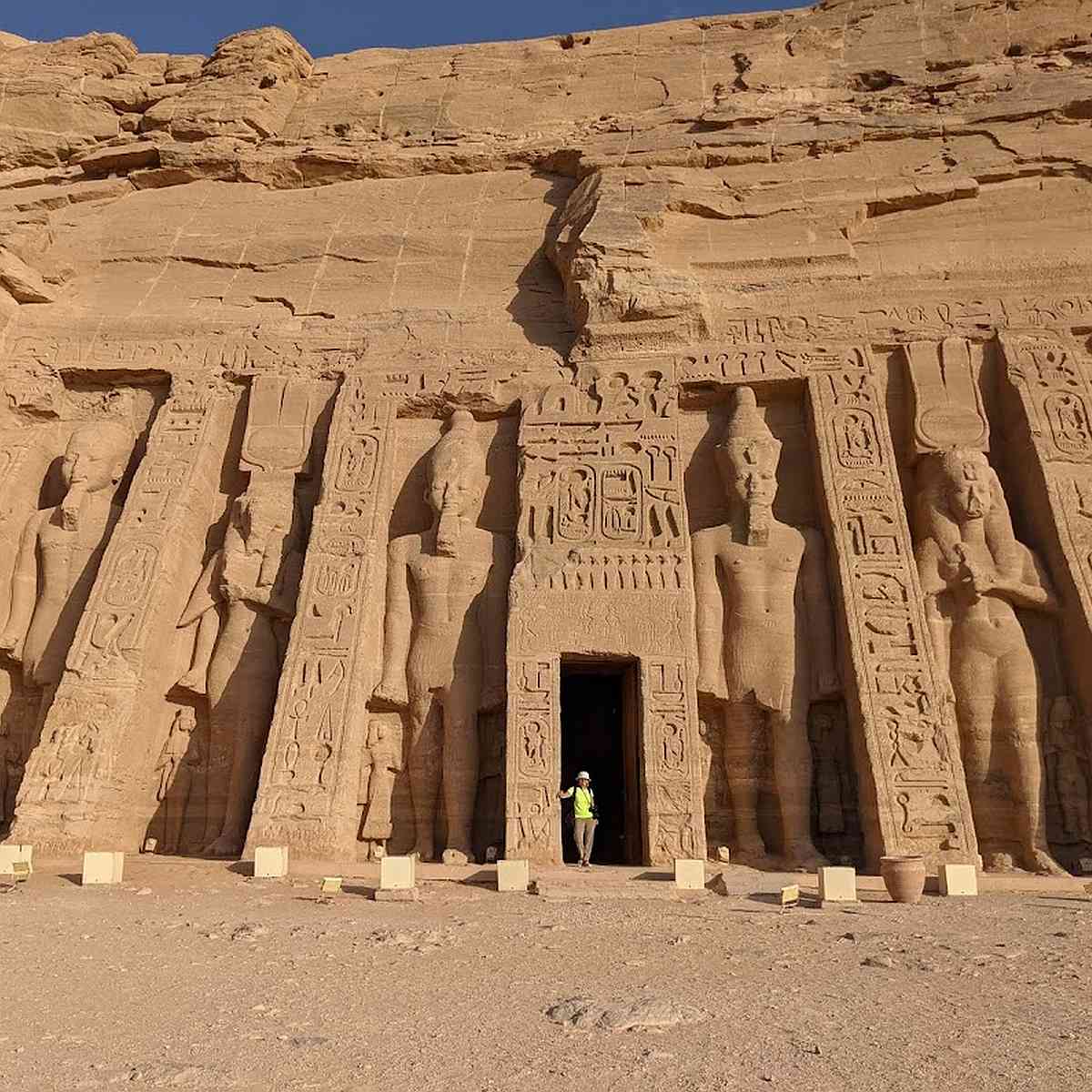 We have traveled through Egypt via three different itineraries. The first trip was a cruise along the Nile, as discussed in this post, while the second concentrated on Cairo (see our post on Cairo) and Alexandria. This last trip we visited Abu Simbel and then west to Siwa, an oasis in the Western Desert (see our post on Siwa). We would only make one itinerary change to the three itineraries and that is to include the Abu Simbel overnight visit with the Nile cruise and not with Siwa.

Egypt has 7 of the Unesco World Heritage sites, is home to the Great Pyramids, its capital (Greater Cairo) is the largest city in Africa and the Middle East. It has such iconic archaeological specimens as Abu Simbel, Valley of the Kings (Queens) and Luxor with all its marvels. It also has one of the world’s most formidable museums (the Antiquities Museum, the new location will open in 2023).

Travel makes one modest. You see what a tiny place you occupy in the world.

Down the Nile – From Luxor to Aswan

As the gateway to the Nile delta, Cairo is the landing spot for Nile cruises, trips to Luxor, Aswan, Valley of the Kings, the Temple of Edfu and Kom Ombo.  The cruise itineraries are 4 to 8 days and take you along a marvelous archaeological journey.

Prior to the 2011 revolution, there were more than  300 cruise boats cruising its waters.   The Egyptian revolution against Mumbarak lead to a severe downturn in tourism due to real and perceived safety concerns.

With less than 40 boats remaining in operation in 2011, the tourism industry was all but dead in Egypt until 2017 when the Egyptian government started offering incentives in order to revive the industry.  In 2019 it was close to the 2010 levels.

In 2020 the pandemic brought tourism back to a crawl, although some movement in travel was seen during our last visit in the fall of 2021

The temple was built during the time (180 to 47BC) of Greek rule and he embodies the traditional architecture of ancient Egypt, largely free of Hellenistic influence. The temple itself is dedicated to the worship of the Egyptian god Horus, who was frequently merged with the Greek god Apollo.

Valley of the Kings and Queens

The Valley of the Kings is a valley where, for a period of nearly 500 years from the 16th to 11th century BC, rock-cut tombs were excavated for the pharaohs and powerful nobles of the New Kingdom (the Eighteenth to the Twentieth Dynasties of Ancient Egypt). The wives of the pharaohs were buried in the Valley of the Queens.

The Karnak Temple is actually a large complex that comprises a vast mix of temples, chapels, pylons, and other buildings, many of them decayed. Construction at the complex began during the reign of Senusret I in the Middle Kingdom (around 2000–1700 BCE) and continued into the Ptolemaic Kingdom (305–30 BCE), although most of the extant buildings date from the New Kingdom (16th to 11th century BC).

The Philae Temple was dedicated to the goddess Isis and the last temple built in the classical Egyptian style.

Besides accessing the ancient sites, a boat trip along the Nile River provides an intimate view of life on the river with majestic scenery and stunning sunsets.  Much like a cruise down the Amazon (see post), a Nile River cruise presents great photography opportunities.

We were on the ship The Sonesta St. George, one of the luxury ships on a 4 day itinerary and sailed from Luxor to Aswan.  Few boats cruise from Cairo to Luxor as the water level is only high enough during the hottest summer months.

The route from Luxor to Aswan has the most well preserved ancient monuments except for the archaeological sites at Dendara and Abydos.  It is possible to take a day cruise directly to Dendara from Luxor.

The first few times we went to Egypt, we regrettably did not spend any time in Aswan. Most cruise lines end or start here and there are daily flights to Cairo or Luxor (pre-pandemic) so you can skip the city altogether. During our last visit to Egypt, we spent a few days here and were happy we did. It is slower and more relaxed than Luxor and Cairo, with darling local villages and a bustling camel market. Also, the Old Cataract Hotel, where Agatha Christie wrote Death on the Nile is a heritage property that is a destination in itself.

Abu Simbel is a small town south of Aswan and home to the iconic temples built by Ramesses II. You can do a day trip to the temples from Aswan (appox 3 hours each way), or stay in the small town overnight. On a cruise down the Nile, you will have to plan Abu Simbel as a side trip, either before or after the cruise. Accommodation is not plentiful but there are a few unique places to stay that will make the overnight memorable.

As a lasting monument to the king and his queen Nefertari, and to commemorate his victory at the Battle of Kadesh, The Pharaoh Ramesses II built two massive rock temples in the middle of the desert during his reign in the  19th Dynasty.

Lake Nasser was created by the Aswan High Dam, which was built in the 1960, the aim was to increase the amount of hydroelectric power, regulate the flooding of the Nile and increase agricultural production . The creation of the lake threatened to submerge a number of significant historical sites, including Abu Simbel. The monuments were dismantled and reconstructed on safer ground.

Their huge external rock relief figures have become iconic. The twin temples were originally carved out of the mountainside in the 13th century BC. They are situated on the western bank of Lake Nasser, about 230 km (140 mi) southwest of Aswan.

The statues, slightly more than 10 m (33 ft) high, are of the king and his queen. On either side of the portal are two statues of the king, wearing the white crown of Upper Egypt (south colossus) and the double crown (north colossus); these are flanked by statues of the queen.

The single entrance is flanked by four colossal, 20 m (66 ft) statues, each representing Ramesses II seated on a throne and wearing the double crown of Upper and Lower Egypt.

Travelers can get to Abu Simbel by coach or minibus from Aswan (3 hours). It is also possible to travel by cruise ship from Aswan through Lake Nasser. There is also a small regional airport in Abu Simbel with flights from Aswan and back (schedule varies depending on season). You can easily connect from Aswan to Cairo.

Whether you are interested in Egyptology (study of ancient Egyptian history, language, literature, religion and architecture) or whether you would rather just marvel at the grandeur of the pyramids, not caring when they were built, Egypt most likely will be on your travel wish list -to visit at least once. Most of the tours arranged for first time travelers to Egypt include the known sites, and though these are spectacular and not to be missed, there are lesser known sites that add to one’s overall understanding of Egyptian and ultimately, human history. In fact, In Europe, Egyptology is primarily regarded as being a philosophical discipline, while in North America it is often regarded as a branch of archaeology . The diverging approaches suggest that Europeans link the study of Egyptology to the study of human understanding in general and not just a study in the history of human activity.

For instance, one of the branches of Egyptology is the evolution of the Egyptian tomb and the underlying reasons behind its development. The most well known are within the pyramids in the Valley of the Kings or the tombs from the Age of the Pyramids (during the Old Kingdom, 2650 to 2150 B.C. spanning from 3rd to 6th Dynasty). However, Many of the key sites delving into this evolution are not included in regular tours and they require a deeper venture into Egyptian history. This venture includes visiting a selection of important early royal and private tomb sites in Upper and Lower Egypt, and examining in detail their architecture and their influence. Some of the choices for an extended archaeological tour would include: