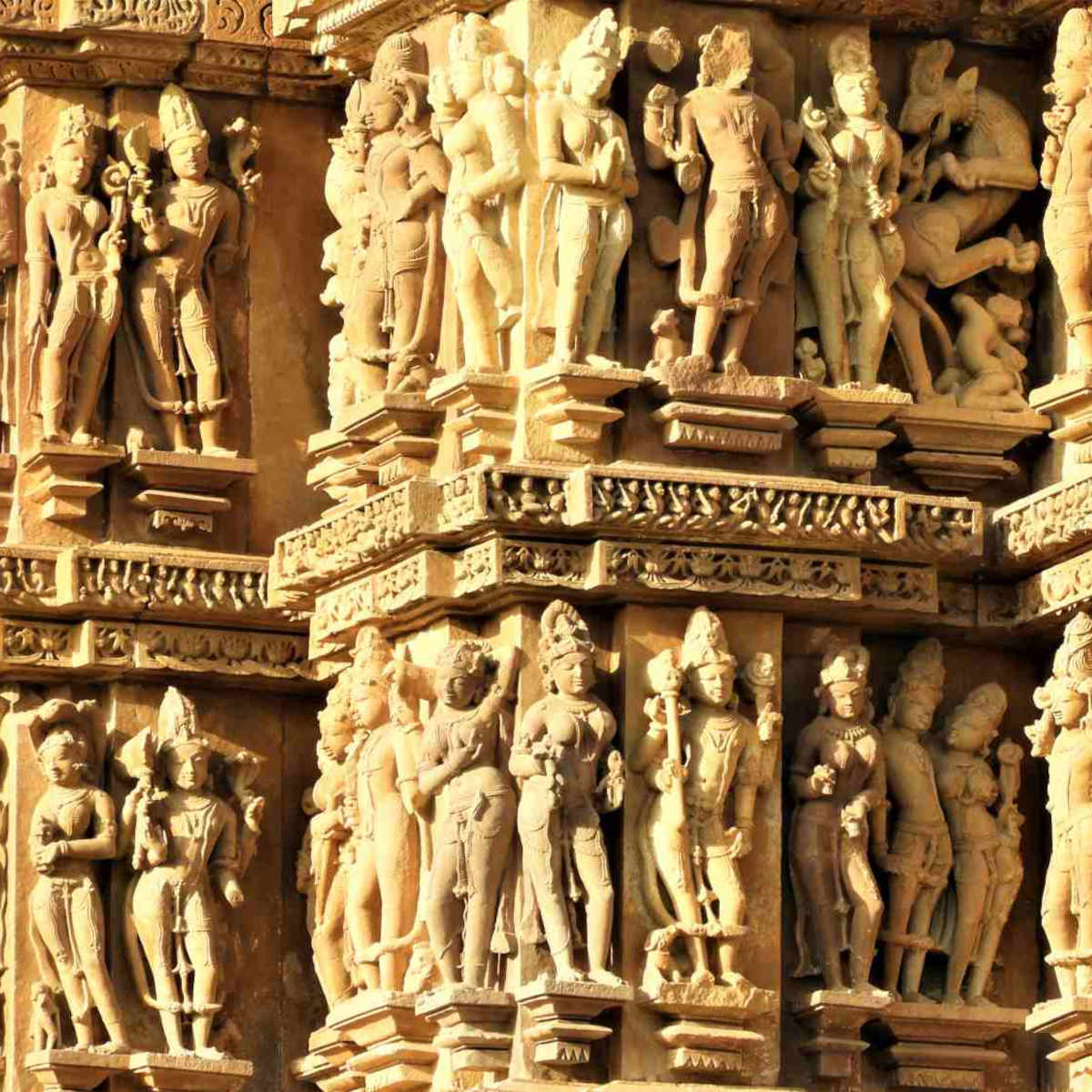 The city of Khajuraho offers a unique experience. The 25 temples are all built in close proximity to one another, with diverging styles and themes that give you an immediate snapshot of Indian religions and architectural styles throughout the ages, making it an inspiring experience.

The city itself is very different from most Indian cities, it is a small quiet town surrounded by natural beauty (Panna National Park, Ajaigarh Fort, Raneh Falls) with a small, local, well-functional airport.  Khajuraho history is a history of temple complexes and Indian heritage sites. You can take a flight from Varanasi, Delhi, Mumbai, Bhopal amongst others.

They are said to be one of the most important specimens of Indian art. These sets of Hindu and Jain temples took around a hundred years to take shape. Originally a collection of 85 temples, the number that have survived is 25.

All temples are sun-facing, a common aesthetic found in Hindu temples, except the temple of Chaturbhuja. The deities of male and female exhibit a co-dependence of the male and female power. The temples run on the basic mandala design comprising a square and circles. The entire precinct is divided into three zones combining to form a pentagon.

The largest temple is the Kandariya Mahadev Temple, meaning “the Great God of the Cave”. It is the largest and most ornate Hindu Temple in the group.

A less creative story says that the depictions served as a form of sex education, by rekindling passions in the ascetic minds of people, who were probably influenced by Buddhism.

The sculptures of the Khajuraho temples are grouped into five categories:

The first category are the cult images and they are built exactly as prescribed in the manual – the Shilpashastra. You can see some of them carved as the teerthankaras in the Jain museum.

The second category are the ones you see in the reliefs and niches and they usually represent attendants, the guardian deities, the gandharvas, the shiva ganas, the ashta dikpalas among others.

The third category are graceful nymphs which portray human emotions. You see them dancing, painting, holding a parrot, caressing a baby or scratching their backs or just undressing. These are not exclusive to Khajuraho, you can see them in several other temples.

The fourth category are scenes from day to day life. The book refers to them as ” secular sculptures.” Warriors, dancers, musicians are coupled with scenes of a royal court, a teacher and a pupil, a sculptor with his students and even funeral scenes.

Jainism and Buddhism emerged around  500 BC, as part of the anti-Brahmanism movementof Hinduism (see our post here about history of Hinduism).

Jainism has no supernatural god and no founder since its adherents consider it an eternal religion. Historically it is associated with the ascetic philosopher Mahavira from around 550 BC who believed that liberation from the cycle of rebirth and death requires Jain devotees to abstain from violence, falsehood, theft, infidelity, and material attachment. The two major sects within the Jain tradition are the ultra-strict and naked Digambara, who believe only men can achieve enlightenment, and the Svetambara sect who wear white and don’t discriminate against women.

If you see a naked monk with a small broom of peacock feathers, he is a Digambara Jain, whereas a white-robed monk with a white wool broom is a Svetambara monk. Both brooms are to sweep away insects so they don’t get squashed. Jainism encourages fasting, yoga, meditation and other austerities. Jain monks (and nuns) renounce all possessions and avoid all violence, even against insects and bacteria on root vegetables. They have little or no possessions and to avoid attachment (to a location) are more nomadic than Buddhists, who gather in monasteries. Jains are also celibate and strict vegetarians (except no root vegetables). To attain moksha (freedom from the cycle of death  and rebirth) they strive to attain a blissful state free from karmic bondage.

The distinct architectural style of temple construction in different parts of India was a result of geographical, climatic, ethnic, racial, historical and linguistic diversities. Ancient Indian temples are classified in three broad types: the Nagara or the Northern style, the Dravida or the Southern style and the Vesara or Mixed style.

The Dravida style of temple architecture, instead of the goddess sculptures, we can see the sculptures of fierce dvarapalas (door keepers) guarding the temple. A large water reservoir or a temple tank enclosed in the complex is general in south Indian temples.

The most distinctive difference from north Indian styles is the use of a shorter and more pyramidal tower. The north Indian idea of multiple shikharas (peaks) rising together as a cluster was not popular in dravida style.

In south India some of the most sacred temples in which the garbhagriha (innermost sanctuary where the primary deity is located) is situated in one of the smallest towers.

The Brihadeeswarar Temple (11th century) has one tower that is 216 ft (66 m) high is a classical example of Dravidian architecture. The sikhara, a cupolic dome (25 tons), is octagonal and rests on a single block of granite, weighing 80 tons