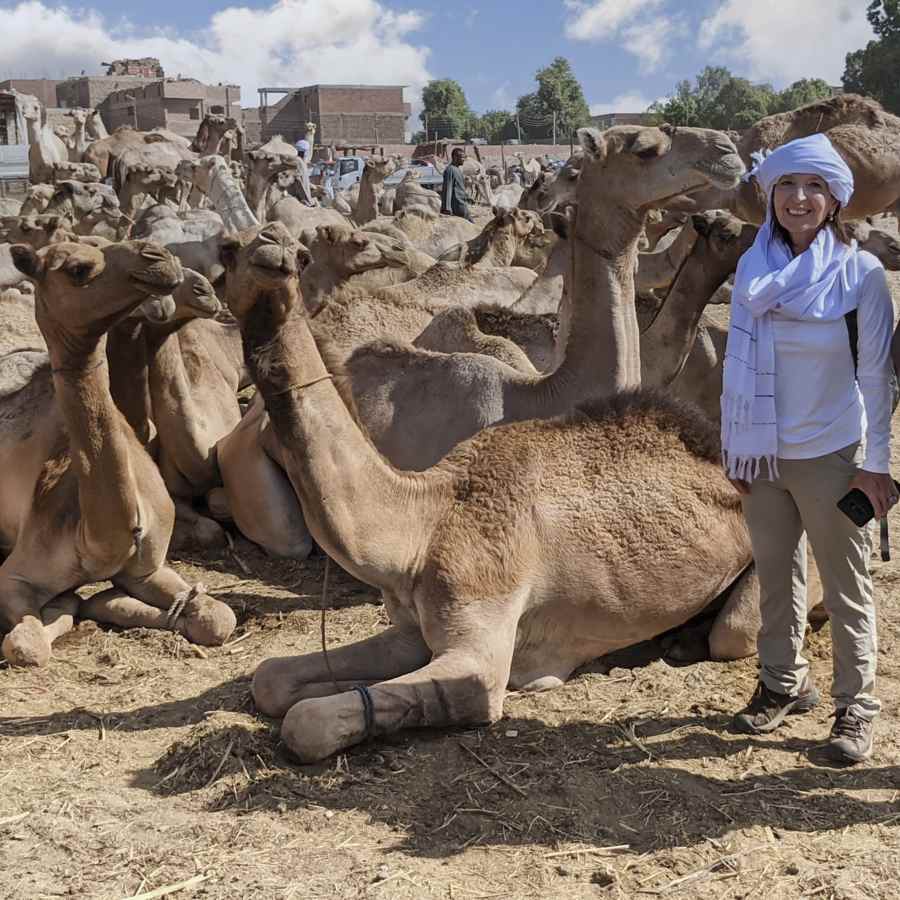 A camel market visit gives you insight into a unique cultural aspect of the middle east. The entire process, from the transportation and the treatment of the camels to the bargaining process and deal consolidation, is a sight to behold, but not a pretty one.

Our travel coordinator located in North America, informed us that she would not be able to get the camel trip approved, mentioning various reasons including the fact that the camel traders don’t want tourists hanging around. She suggested we try directly with our guide once in Aswan.

There is very little information on the times and dates when the various markets are open, whether tourists are allowed in, how tourists are received, etc. Based on scant information, we determined that if the Daraw market was usually open on Tuesdays and Sundays, a camel market visit was possible within our itinerary constraints.

Surprisingly, when we got to Aswan, our local guide informed us that a visit to the market is actually offered as a day trip from Aswan by many tour companies, although not all packages include it. He said there would be no problem going.

We set out very early on the 40 km journey from Aswan to Daraw. Once we got to Daraw, our guide had to ask the locals for directions several times as we approached the general area; the market was behind very high wall enclosures and not easily found.

It was not until we were inside the market gates that we realized the immense size of this market and the horrible plight for the animals. These camels have been traveling for many long hours. They have been beaten while being shoved into transportation vehicles where they clearly do not fit. The trip is so difficult that some of the camels do not make the trip and are ill by the time they arrive. The ill camels are quickly slaughtered and the camel meat is sold.

Once the healthy camels are unloaded, each camel trader takes care of his own camels. The lucky camels are kept in walled courtyards and are free to roam about. Most are not so lucky and have their legs tied at the knees to keep them from wandering, although this method only impedes them slightly, because the camels are able to gallop on three legs. From time to time, a group of camels bolt off from their herd in an awkward three-legged gallop-hop with one or more young camel traders running after them with sticks.

Most of the camels come in caravans from the Sudan and stop just north of Abu Simbel before being trucked to Daraw. The market is a sight to behold, very lively with thousands of buyers and traders from different parts of the region. We learned that camels are sold here every day of the week, but the main days are Tuesday, Saturday and Sunday. Here they spend two days in quarantine before being sold by their Sudanese owners. Most of the ones sold go on to the camel market in Birqash, about 35km northwest of Cairo, where they are either sold to Egyptian farmers, exported to neighboring countries or slaughtered for meat. Daraw is also a meat market and there’s a butcher who kills the animal, skins it, chops it and puts all the pieces together in a plastic bag. Animal advocates or squeamish visitors take note, this is not a pretty sight. The trading itself is a picturesque sight and fascinating process to see. Groups of bidders stand around and buy/sell as many as 2000 camels per day.

The buyers stand in a large throng and the camels are paraded out in front of them. One camel is brought out at a time. The traders surround the camel and hit it with sticks, beating it from every direction in order to keep it in place long enough for the buyers to get a good look. The camel protests loudly by yelling and prancing about. Sometimes the camel will fall to the ground and refuse to get up. When this happens, the traders resort to beating it more in order to get it up. The buyer and seller then begin a long heated discussion on the price with other buyers and sellers egging them on, trying to get them to make a deal. This show can go on for hours, our guide told us that both the buyer and seller know what the final price will be but they insist on the back and forth bantering as a show of honor, that the best price was attained.

A male camel can weigh about 400 kg, and the meat sells cheaper than beef. Many Egyptians told us they had eaten camel but it was not regular fare, which is a surprise to us. The preferred cuts of meat are the brisket, ribs and loins, though the fatty hump is considered a delicacy. Elizabeth Shoghi, a Swedish chef coined the phrase “camel tastes of wilderness”. It is a robust flavor that dominates everything else on the plate. Camel meat can also be served as carpaccio.

What struck me most about the camel market was the absence of tourists. During the three hours we spent there, we saw one group of about 6 tourists get out of their van, look around and snap some pictures but then quickly get back into their vehicle and drive away. They stayed by the front gates and did not wander deep inside. We also ran into a photographer who had his own guide and stayed for some time. That was all the visitors we saw during the three hours. Walking around, we did feel conspicuous but not uncomfortable since most of the camel traders/owners paid very little attention to us. In order to feel a bit less conspicuous, I purchased a keffiyeh from one of the local merchants who also helped me put it on. We did not bring our big camera lenses as that would have attracted too much attention. We used a smaller camera and cell phones, always aware that we were invading private territory.