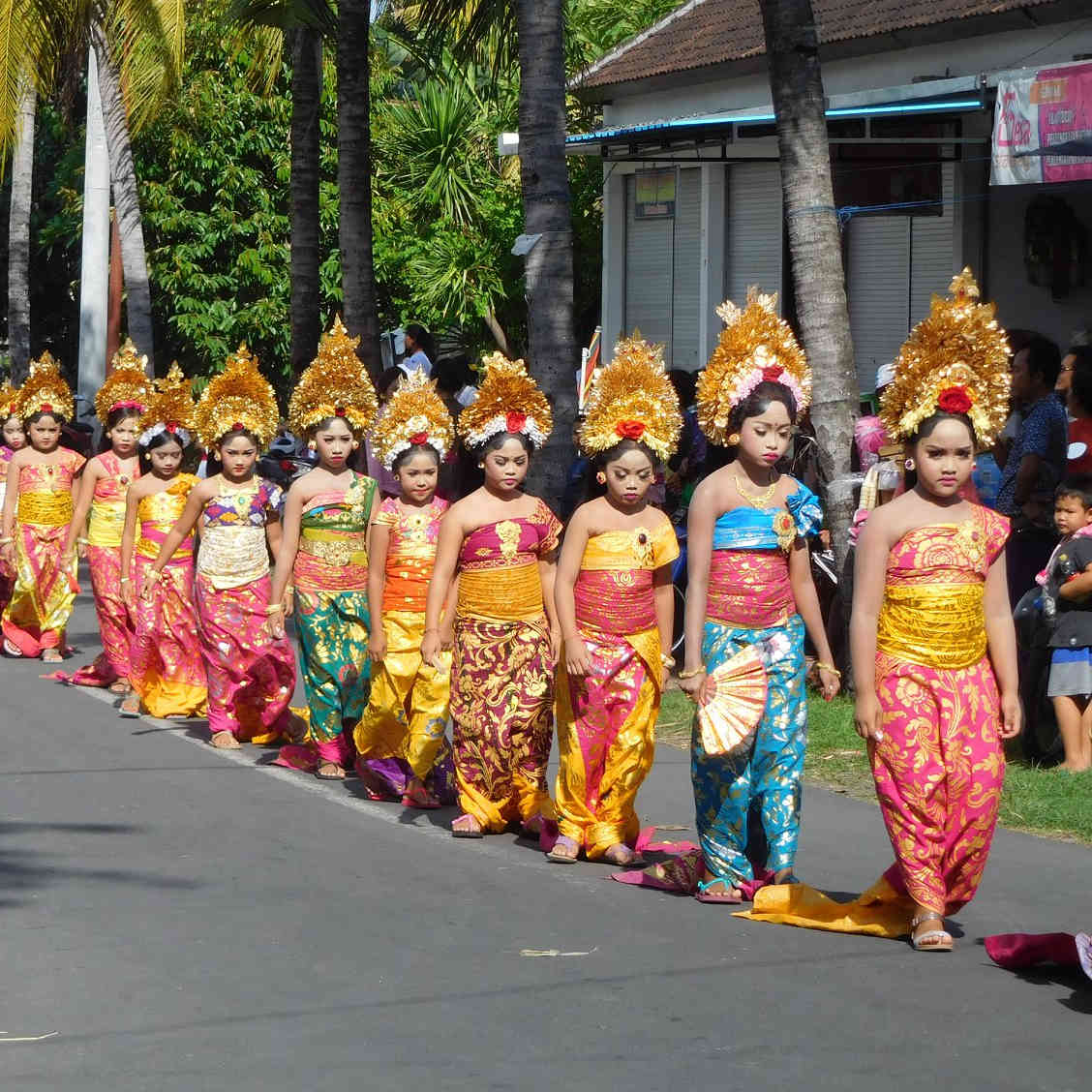 The Island of Enchantment

Bali is both an island and a province in Indonesia, a country with 17,500 other islands. It is the only Hindu majority province, in the otherwise muslim majority Indonesia. Islamic fundamentalists blew up two nightclubs in 2002 in the tourist hub of Kuta, but everything seems controlled now on that front. In 2017, Bali received more tourists (8.7 million) than Las Vegas. In contrast to Bali’s commercialization, the Island of Borneo has fewer tourists and boasts a rich biodiverse rainforest (see our blog on Borneo).

Life, religion and art all converge in Bali. They have no word in their language for ‘artist’ or ‘art.’ Everyone is an artist.      Anais Nin

Bali has been on a lot of western tourists’ bucket lists since the 1930’s, when anthropologists & musicians (including Walter Spies, Margaret Mead, Colin McPhee) visited and wrote about the ‘island of enchantment’. The 1932 documentary “Virgins of Bali” further reinforced the image of Bali as a sensual place where nudity was permitted.

There are typical areas that appeal to tourists, but the two main tourist areas are the central area around Ubud and the south around Kuta and Seminyak, Jimbran and Denpasar.

Ubud became well known within the international community with the 2006 book “Eat, Pray, Love” and the 2010 film starring Julia Roberts. The town of Ubud consists of 14 small villages and a very touristy town center with a few inter-crossing streets and alleyways with restaurants, museums and T shirt and crafts shops. Near the town center is the iconic monkey forest.

There are over 400 hotels within a 6 mile radius of Ubud; most are economical but there are a few upscale resorts that almost make Bali worth a visit just to stay at one of them: Bulgari, Aman resorts, Banyan, St. Regis, Four Seasons and Ritz Carlton all have properties here.

Our stay at the Four Seasons Sayan resort made our trip to Bali worth it (no, we aren’t get paid to say this). The resort was built decades ago, and the design by architect John Heah (who has also designed Aman resorts) still perfectly blends into the hillside. This property continues to be rated as one of the best hotels in the world. It wasn’t very crowded so we were upgraded to a villa, and we were the sole diners at Sokasi’s Chef’s table, with babi guling (suckling pig).

Other typical attractions on most itineraries near Ubud, are the Tegenungan  waterfall, the Tegallalang rice fields, and the monkey forest. As with most places in Bali, these attractions have been over-commercialized, with lots of T-shirt kiosks, food stalls and street vendors peddling junk, and very crowded unless you arrive first thing in the morning. Rafting on the Ayung river and the Gunung Kawi Temple was much less crowded.

On a clear day, you can see Bali’s Mount Agung (volcano) from most places. Other typical street scenes shown below: planting rice fields, locals bathing while doing laundry, road-side skinning a hog – we didn’t stay long enough to see if it was also butchered there.

Bali festivals are a treat for the senses. The costumes are spectacular, with the whole community participating including men, women and children. The colorful costumes are a reflection of the diversity of Bali’s culture.

The Ulun Danu temple is on Lake Beratan in north central Bali (near Bedugul), and is on most tourist itineraries. Also known as the water or lake temple, it was built in 1633 and is used for offerings and ceremonies to the Balinese water goddess Dewi Danu. Buddha’s statue is also enshrined in the temple. TIP: You will see many photos online making the temple seem large, inviting and mysterious; however in reality it is underwhelming, crowded and a tacky carnival vibe. It does not merit the long drive, unless you happen to be at the nearby Handara Golf Club. Note that convoys of tour buses stop at nearby restaurants for lunch, so time your visit to avoid those hoards.

If you do decide to visit Ulun Danu, get off the main road that connects Lake Beratan to southern Bali, and drive through some of Bali’s minority muslim communities. As the island is the only majority Hindu province in Indonesia (85%), most Muslims who live on the island are in the West adjacent to Java. The small communities in the north seem isolated and insular.The Frog statues and other kitch create a cheap carnival vibe.

This is narrow road (above) is actually a main “highway” that connects all points south (Denpasar airport) to central and north points of interest. It congests quickly, which is why short distances become hours long trips. During festive time, streets are lined with tall, curved penjor bamboo poles, decorated to express gratitude for a good harvest.

The southern part of the island of Bali has many beach destinations, but Kuta and Legian are the best known and most crowded. Jimbran is an actual village, offering points of interest like its fish market and temple but still close enough to Kuta if you want that frenzied scene. Seminyak is also nearby, but calmer. Nusa Dua is quieter because it offers luxury resorts and their private beaches.

Sanur is a fishing village turned tourist destination because of its long stretch of beach, as well as the Pura Blanjong temple. It has a more laid back vibe, and with moderately priced accommodation than Kuta, which is about a 25 minute drive. However, unless you like the laid back beach experience, you would not stay here longer than a few hours.

Our guide hooked us up with a local fisherman in Sanur who was happy to demonstrate his casting technique. The twinkle in his eye suggests this his not the first time he posed with a tourist.

Ulu Watu is famous for the nearby Uluwatu Temple, a Hindu temple built on the clifftop. It has spectacular beaches as well as memorable sunsets. We stayed at the Anantara resort there, a relatively new resort with some great views and fewer crowds, and well worth the stay.